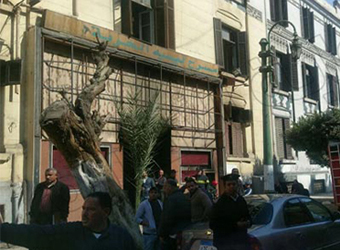 The fire erupted in the main stage of the theater on the ground floor on Tuesday, destroying it before spreading to the second floor of the building.

According to Cairo security directorate, 22 fire engines were sent to put out the fire.

Security forces are still investigating the causes of fire.

The theatre is located close to the American University in Cairo’s downtown campus.

Prior to the outbreak of fire, the stage had been used as the set of DMC TV channel’s weekly variety show “Come and Have a Cup of Tea,” presented by actress Ghada Adel.

Adel stated on her official Facebook page that the whole theatre was destroyed and the channel is now searching for a studio to record the show.

The school was nationalised after the 1952 revolution and the theatre was leased out, becoming famous for hosting commercially successful comic and musical plays.