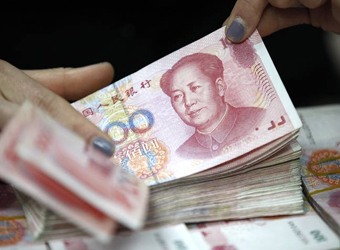 China’s foreign exchange reserves fell to near six-year lows in December, but held just above the critical $3 trillion level (2.44 trillion pounds), as authorities stepped in to support the weakening yuan ahead of U.S. President-elect Donald Trump’s inauguration.

China’s reserves shrank by $41 billion in December, slightly less than feared but the sixth straight month of declines, data showed on Saturday, after a week in which Beijing moved aggressively to punish those betting against the currency and make it harder for money to get out of the country.

Analysts had forecast a drop of $51 billion.

While the $3 trillion mark is not seen as a firm “line in the sand” for Beijing, concerns are swirling in global financial markets over the speed with which the country is depleting its ammunition to defend the currency and staunch capital outflows.

Some analysts estimate it needs to retain a minimum of $2.6 trillion to $2.8 trillion under the International Monetary Fund’s (IMF’s) adequacy measures.

If pressure on the yuan persists, analysts suspect China will continue to tighten the screws on outflows via administrative and regulatory means, while pouncing sporadically on short sellers in forex markets to discourage them from building up excessive bets against the currency.

But if it continues to burn through reserves at a rapid rate, some strategists believe China’s leaders may have little choice but to sanction another big “one-off” devaluation like that in 2015, which would likely roil global financial markets and stoke tensions with the new Trump administration.

The yuan depreciated 6.6 percent against the surging dollar in 2016, its biggest one-year loss since 1994, and is expected to weaken further this year if the dollar’s rally has legs.

Adding to the pressure, Trump has vowed to label China a currency manipulator on his first day in office, and has threatened to slap huge tariffs on imports of Chinese goods.

That has left Chinese eager to get money out of the country, creating what some researchers describe as a potentially destructive negative feedback loop, where fears of further yuan falls spur outflows that pile fresh pressure on the currency.

“For 2016 as a whole we estimate total capital outflows to have been around $710 billion,” Capital Economics’ China economist Chang Liu told Reuters in an email.

The main reason China’s forex reserves fell in 2016 was because the central bank used them to stabilise the yuan, the country’s foreign exchange regulator said in a statement after the data.

With the dollar gaining ground, a decline in the value of other currencies held by China also contributed to the decline, the State Administration of Foreign Exchange (SAFE) said.

“Forex reserves are likely to fall again in January,” China’s SWS MU Fund Management said in a note, predicting the U.S. economy and the dollar would continue to strengthen.

China has stepped up efforts in recent weeks to shore up the yuan and curb capital outflows, sparking speculation it wants a firm grip on the currency ahead of Trump’s inauguration on Jan. 20 and the long Lunar New Year holidays at the end of the month.

State banks have bought yuan and sold dollars and regulators have tightened restrictions on individuals and companies who want to move funds out of the country, while denying they are imposing fresh capital controls.

This week the central bank also set higher daily guidance rates for the yuan, hiking it the most in a decade on Friday, and Beijing was suspected of pushing up yuan borrowing costs in Hong Kong to discourage offshore investors from making bearish bets on the currency. [CNY/]

SAFE said in late December that net cross-border capital outflows were expected to narrow in the fourth quarter in 2016, while the People’s Bank of China (PBOC) said last week that it would push reforms of the yuan regime, while keeping the currency basically stable in 2017.

Regulators recently said they would step up monitoring of individual foreign exchange purchases to close loopholes, but the $50,000 yearly quota would not change.

While the yuan has soared this week as China bears down on the market, a Reuters poll showed it is expected to slide at least 4 percent this year, largely as expectations of interest rate hikes in the United States drive the dollar higher.