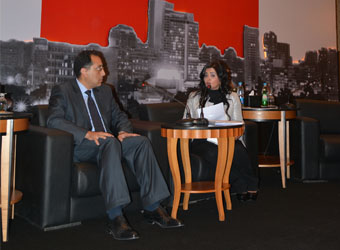 A significant increase in pre-registered visitor numbers at Cityscape Egypt 2014 one day ahead of the show’s grand opening has underscored the improving sentiment that now pervades the Egypt’s property market.

Figures from Informa Exhibitions, organizers of the four-day exhibition, confirm that pre-registered visitors for Egypt’s most prominent real estate showcase are 25 per cent up versus last year, signifying the largest number since its inception in 2008.

Taking place from 9-12 April at the Cairo International Convention Centre (CICC), Cityscape Egypt is in its 5th edition, hosting more than 100 exhibitors from across Egypt. Showcasing their latest developments and property launches located across Greater Cairo, North Coast, Red Sea Coast and Upper Egypt, they will be eager to meet with thousands of investors and home buyers expected to attend the event in the next few days.

“We are very pleased to see such a strong increase in visitor preregistrations this year”, said Wouter Molman, Director of Cityscape Group at Informa Exhibitions. “Virtually all of Egypt’s leading real estate developers are present at this year’s edition of Cityscape Egypt, making it a unique opportunity for investors and home buyers to select their next home from the thousands of properties on showcase this year”.

“Cityscape Egypt attracted 12,000 visitors in 2013 and indications are that we will see a double digit increase of visitors this year to match the growth of the show, which itself has grown by over 10%, making this the largest ever edition of Cityscape Egypt”, added Molman.

Hany El-Assal, Chairman of Misr Italia Holding, has announced his company’s participation at Cityscape Egypt 2014, recognizing it as a prime opportunity to announce its new project CAIRO BUSINESS PARK, located in the 5th settlement, New Cairo. Elaborating on the project, El-Assal said that it is a hub of investments estimated at around EGP 2 billion and covering an area of 350,000 square meters. Set in lush greenery and aquatic landscaping, the modern compound presents an idyllic meeting point for businesses.

Misr Italia will be also launching exclusive units in one of the Red Sea’s largest and most premium resorts; Mousa Coast Resort. The project will cover 8 million square meters in two phases, with investments totaling EGP 10 billion. Commenting on the popularity of the Cityscape exhibition, El-Assal predicted a high turnout of visitors, demonstrating the growing purchasing power in the region.

Emaar Misr, one of Egypt’s largest real estate companies, will launch new touristic and residential projects including the first Phase of Blanca islands in its North Coast development Marrasi, and Park Residence in Mivida, New Cairo.

Speaking on behalf of Al-Futtaim, Managing Director Mr. Mohamed El Mikawi affirmed that the real estate sector is being revived due to the increase in demand. He announced the launch of the second phase of its Cairo Festival City project at Cityscape Egypt 2014, comprising of five administrative buildings over 50 thousand square meters of built-up area, in addition to 300 villas, 600 residential apartments, and a touristic hotel with total investments worth EGP 4 billion.

Mikawi confirmed having sold out 70% of its residential units in the second phase of the project, as well as a full office building part of the same phase.

Hussein Sabbour, Chairman of Al Ahly for Real Estate Development, stated that the real estate market is still attractive for investment, referring to the signing of agreements between his company and Saudi investors to develop two projects in Egypt, including Square 1 located in New Cairo and Square 2, located in El Mostakbal City.

Magued Sherif, CEO of Hyde Park Properties for Development, said that the Egyptian real estate market is strong and has all the necessary fundamentals to attract new investments that will drive market growth in the upcoming years. Sherif said that his company will implement an expansion strategy in the market that aims at developing 1500 acres in the next year. The company is seeking to launch the neighboring number 10 in Hyde Park project; a compound of separate/linked new model villas with about EGP 100 million dedicated investment cost, and expected sales of EGP 150 million.

Eng. Darwish Hassanein, CEO of Saudi Egyptian Construction Company (SECON) said that his company will launch their new project “Secon Nile Towers” at Cityscape Egypt 2014, with a project value of about EGP 1.6 billion, in addition to the second phases of its “Lake Dream” and “Zahret Asiut” projects, as well as the “Secon Residence” project in Alexandria. SECON plans to develop approximately EGP 3 billion worth of projects in the next five years.

Hassan Hussein, CEO of El Taamir Mortgage Finance Company “Al Oula”, predicts that the mortgage market will witness major developments this year supported by the Central Bank of Egypt’s initiative to make available EGP 10 billion to finance affordable housing units. His company, who are also Gold Sponsor of this year’s exhibition, will sign four agreements on the sidelines of Cityscape Egypt 2014, including deals with Al Arabiya Real Estate Investment, Hyde Park Properties for Development, SODIC and Tameer for Real Estate and Development, to provide mortgage options to its customers.