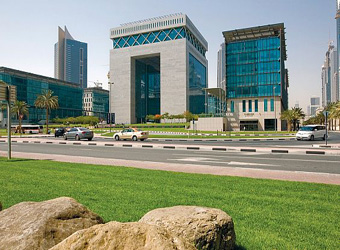 The Dubai International Financial Centre (DIFC) is charging buyers a much higher registration fees for real estate transactions within its jurisdiction.

Notwithstanding the fact that the DIFC charges the buyer a 3.5 per cent transfer fees (as opposed to 2 per cent elsewhere in Dubai’s freehold property landscape), the real estate section of the regional financial hub does not recognize a property’s market value (as assessed by RERA-approved valuation firms) or even the actual transaction price.

Instead, investors in DIFC-regulated properties are being made to pay registration fees on an inflated property value, as assessed by the DIFC using an apparently skewed mechanism, with buyers having to cough up to 6 per cent as transfer fees on the actual transaction price.

An investor who did not wish to be named told this website that he was in for a rude shock when he went to register an apartment that he recently purchased in the Limestone House for Dh1.6 million (actual transaction price). A registered property valuer valued it for Dh1.7 million (RERA-certified valuator’s estimate).

The reasoning? He was told that the DIFC-assessed value was 20 per cent lower than the original price of Dh3.2 million that the apartment was sold at in the heydays of Dubai property boom.

While it is a known fact that property prices have declined by as much as 60 per cent from their peak in some areas, the DIFC-assessed values are much higher than on-ground transaction prices, inflating the registration fee burden on buyers.

“Why are they not accepting the valuation document?” asks the investor. “It [property valuation] has been done by a Rera-authorized person. They just can’t deny or turn a blind eye and put a valuation that is much higher than the current market price,” he argues.

In this particular instance, the investor had to shell out Dh91,000 as transfer fees (calculated @ 3.5 per cent of the DIFC-assessed value) as opposed to the Dh56,000 that he would have had to pay were the DIFC to recognize the actual transaction price, or even the Dh59,500 if the RERA-approved valuation agent’s price were to be taken.

“Now, I have to shell out an additional Dh31,500 for registration… investors will be put off by the steep charges and it will not help in recovery of the market,” the investor said.

Emirates 24/7 approached the DIFC for clarifications on the issue but were yet to receive a response at the time of publishing this article.

“It is up to DIFC to legislate on this as it is governed separately from the rest of Dubai, i.e., using UK Common Law,” Robin Teh, Country Manager – UAE/Director, Valuations & Advisory – MENA, Chesterton International, told this website. “The basis of valuation is similar however in this case. It could be the comparables obtained that is giving such a difference in value,” he reckoned.

“I believe the investor should be able to challenge it in the DIFC Court in terms of market value as the difference between Dh1.6 million and Dh2.6 million is simply too much,” he added.

Under the DIFC Real Property Regulation, the freehold transfer fee is currently calculated at the rate of 3.5 per cent of the amount referred to in clause 3.1, which reads as follows: “The freehold transfer fee is based on the amount of the consideration paid or payable for the interest, or an amount that is 15 per cent below the market value of the interest, whichever is the greater.”

If the transfer fee is not paid within 30 days after the effective date of the freehold transaction, interest is payable at the rate of five per cent per annum until the fee is actually paid.

This website reported in December 2010 that the centre did not have plans to reduce the current freehold transfer fee, nor introduce any additional fee on property transactions.

“There is currently no plan to either reduce the freehold transfer fee or impose additional fees imposed by other jurisdictions, for example, on mortgages,” a DIFC official had then said.

The financial centre announced a series of changes to its property regulations and amendments to the definition of freehold transaction and where freehold transfer fee were not payable in November 2010.

As per the DIFC, a full freehold transfer fee payment will be exempted in the following circumstances: Where a transfer is to accommodate a change where the beneficial interest does not significantly change (for example, where a person wishes to transfer his or her interest to or from a company where that person is the sole director and shareholder); a party enters into an Islamic financing agreement; the buying and selling of shares of a publicly listed company through stock markets; and when a person inherits the estate of another by law or by the terms of a will.