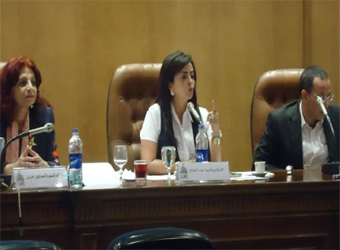 The Egyptian media figure Dina Abdel Fattah, Editor-in-chief of Amwal Al Ghad magazine, moderated on Monday a panel entitled “Economic Reform Program: Vision & Analysis” at the Shura Council’s session. This panel is included in the program of capacity building for parliamentarians, in association with the Bundesrat (German Parliament) that aims to improve the workers’ abilities in the different committees of the council.

Ahmed Ghoneim, Professor of Economics at Cairo University, Dr. Salwa Huzein, Director of Washington Center for Economic Studies, attended the panel in addition to a number of researchers in the Shura Council’s committees.

The panel has evaluated the economic reform program of the government set in the light of the International Monetary Fund (IMF)’s conditions, notably cutting the subsidies for several products and strategic commodities along with its impact on the impoverished classes. It has discussed whether the proposed economic reform program would obtain the nation’s consensus or not amid the growing rising prices. The panel witnessed effective discussions among the participants in the council.

Also, The panel has tackled the opposition’s deep concerns over the cabinet’s plans to request more loans suggesting possible alternatives to overcome the current massive budget deficit without being force to adopt a deflationary policy.

The ongoing negotiations between the Egyptian authorities and the IMF over the US$ 4.8 billion loan were reviewed during the panel’s discussions. The participants have discussed whether obtaining the IMF loan would uplift the investors’ confidence in Egypt’s economy and allure more investments to the cash-strapped country. They have talked about the current financial gap the country is witnessing and whether by the sukuk launch, this gap would begone or not.