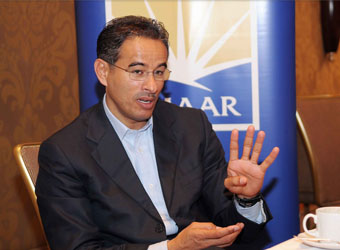 The Dubai property developer seeks to invest in several projects Egyptian government recently announced, including the new administrative capital city and New El Alamein city in addition to others in Cairo and South Sinai.

Alabbar made his remarks during his meeting in Cairo on Monday with Egyptian Minister of Investment and International Cooperation Sahar Nasr.

Egyptian government will start negotiations with Alabbar soon over the anticipated projects in the country, Minister Nasr said.

Egypt’s ambitious plan to construct a new metropolis 45 km (28 miles) east of Cairo was announced in March 2015 at a Sharm al-Sheikh summit held to lure back foreign investors who fled after the 2011 revolt. Dubai-based Emaar originally meant to lead the Egyptian project yet it decided later to quit.

The project, one of several announced by President Abdel Fattah al-Sisi to develop the economy and create jobs for a growing population of 91 million.