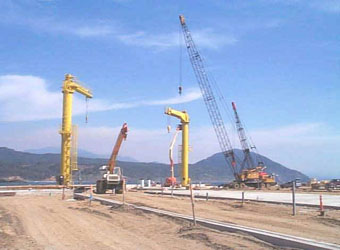 An oil pipeline, railway and motorway will also be built linking Lamu to South Sudan and Ethiopia.

A BBC reporter says security concerns for the project may explain the presence of Ethiopian and Kenyan troops in Somalia aiming to pacify the region.

“I have no doubt that this day will go down in history as one of the defining moments – when we made a major stride to connect our people to the many socio-economic opportunities that lie ahead,” AFP news agency quotes Mr Kibaki as saying at the inauguration ceremony.

Known as Lamu Port South Sudan Ethiopia Transport Corridor (Lapsset), it is expected to be completed within four years with initial costs coming from the three governments and plans to attract international investment.