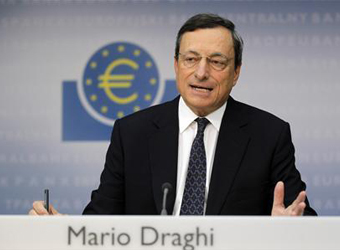 The European Central Bank (ECB) held on Thursday its benchmark interest rate at zero percent as President Mario Draghi suggested downside risks to the bloc’s economy had diminished and its economic recovery picked up pace.

The ECB chief repeated his warning from previous meetings that risks remained tilted towards the downside, however, said these same risks were now less severe given the euro zone’s economic expansion.

“Incoming data since our meeting in early March confirm that the cyclical recovery of the euro area economy is becoming increasingly solid and that downside risks have further diminished,” Draghi said in his opening statement to reporters in Frankfurt on Thursday.

The ECB left its monetary policy unchanged Thursday and also stuck with its monthly rate of asset purchases until at least the end of the year. Europe’s central bank is set to proceed with a monthly pace of quantitative easing (QE) bond purchases of 60 billion euros ($65.5 billion).

Euro zone inflation continues to undershoot the ECB’s target of 2 percent yet economic data has been on its best run since the global financial crisis and ECB policymakers would have noticed a significant uptick in confidence indicators since the March meeting.

“Underlying inflation pressures continue to remain subdued and have yet to show a convincing upward trend… The ongoing volatility in headline inflation underlines the need to look through transient developments which have no implication for the medium-term outlook for price stability,” Draghi added.

Given French voters are due to elect a new President on May 7, many observers correctly predicted Europe’s central bank would choose not to make major changes at such a politically sensitive time.

The subtle adjustment in tone from Draghi and the ECB will be seen by some investors as a forewarning to more bold changes to monetary policy in June.

“Even though political risks are fading and data releases remain strong, the ECB is still unwilling to veer too far off their present course,” Timothy Graf, head of macro strategy at State Street Global Markets said in a note.

“With German yields having corrected higher following the French election result, bond bears are likely to be a bit disappointed with the ECB’s continued unwillingness to think about tighter policy,” Graf added.

When asked by a reporter how comfortable he was with just 10 days to go until France chooses between the centrist and pro-European candidate, Emmanuel Macron, and anti-EU far-right leader, Marine Le Pen, as its new premier, Draghi said the central bank’s policymakers had only discussed “policies (and) not politics”.

Elsewhere, the Bank of Japan, which is also operating deep in the unconventional territory, adopted its most significantly optimistic tone in almost a decade on Thursday although indicated it would leave its massive stimulus effort unchanged.