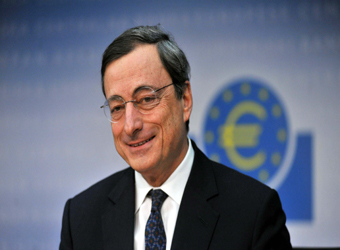 The European Central Bank will restart its controversial government bond purchases rather than offer banks another round of unlimited three-year loans as the sovereign debt crisis worsens, a survey of economists shows.

Of 22 economists polled this week, 17 predicted the ECB will be forced to resume the Securities Markets Program (ECBCSMP), while only one forecast it will offer another batch of three-year cash. Nine said the central bank may consider shorter maturity loans of one or two years.

“Market stresses will eventually force the ECB to restart the bond program, but it’s not imminent,” said Ken Wattret, chief euro-area economist at BNP Paribas in London, who participated in the survey conducted April 11-12. “Trying to get consensus on the council for it will be difficult.”

The bond purchases have split the ECB’s Governing Council, with German policy makers in particular arguing they blur the line between monetary and fiscal policy. The program was mothballed a month ago after the ECB’s 1 trillion euros ($1.3 trillion) of three-year loans reversed a sell-off in Italian and Spanish bonds that threatened to splinter the 17-nation euro region.

With tensions returning and driving up borrowing costs again in Spain and Italy, some economists say the so-called Longer Term Refinancing Operations aren’t the game-changer they were hailed to be.

“There is mounting evidence that the LTRO is pretty toxic for banks and isn’t working,” said James Nixon, chief European economist at Societe Generale in London and a former ECB official. “I don’t think there will be another one.”

Debt markets rallied after the ECB’s three-year tenders in December and February as banks used some of the cheap cash to buy government bonds. Investment in government debt by Spanish banks climbed to a record 246 billion euros in February, an increase of 20 percent from December, ECB figures show.

The effect on bond markets is waning now and banks are left with assets that investors are increasingly wary of, said Jacques Cailloux, chief European economist at Royal Bank of Scotland Group Plc (RBS) in London.

“Something is wrong when you load up on assets that were considered risky in November and deemed un-risky in January,” he said. “Now we’re seeing the worst you could have hoped for. As soon as the situation of the sovereign worsens, banks will come under additional market pressure. That’s extremely negative.”

Shares of Bankinter SA (BKT), a Madrid-based mortgage lender that used three-year funds from the ECB to acquire short-duration government bonds, have plunged 26 percent this year.

Intesa Sanpaolo SpA (ISP), which snapped up 36 billion euros in three-year cash and partially used the money to buy Italian debt, has dropped 7.3 percent. By contrast, the Bloomberg Europe Banks and Financial Services Index of 43 companies has gained 7 percent this year.

“The crisis will force the ECB to intervene again and I suspect Coeure’s comments were testing the waters a bit,” said Carsten Brzeski, senior economist at ING Group in Brussels. “The reaction showed that even verbal intervention helps at this stage.”

Spanish “market conditions are not justified,” Coeure said at an event in Paris. “Will the ECB intervene? We have an instrument, the securities markets program, which hasn’t been used recently but it still exists.”

The remarks were criticized yesterday by fellow ECB policy maker Athanasios Orphanides, who said it’s “not right to front- run decisions” that are made by the council as a whole.

Since the bond program began in May 2010, the ECB has spent 214 billion euros on debt from Greece, Ireland, Portugal, Italy and Spain. The purchases prompted the resignation of ECB chief economist Juergen Stark at the end of last year.

Bundesbank President Jens Weidmann said in December that he’s “not a fan of the SMP” and that other ECB policy makers were “becoming increasingly skeptical” about its efficacy. The buying dwindled after that and only 27 million euros of purchases have been settled in the past two months.

“There is no evidence that the SMP is the tool that brings about a sustained decline in yields,” said Cailloux. Spain’s 10-year bond yield surged to more than 6.6 percent in November after the ECB began to intervene in Spanish markets in August.

The ECB may be inclined to wait as long as possible on further measures given its previous activism reduced pressure on governments to push through reforms, Wattret said.

“If the crisis has shown us one thing, it’s that market pressure will move governments to act,” he said. “So the ECB has good reason to wait.”