Egypt a major investment destination after after pound floatation: Qalaa 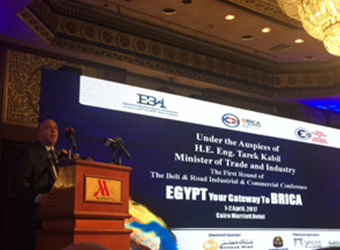 Egypt has become among the most important countries for foreign investments after it floated its currency last year, Ahmed Heikal, founder and CEO of Egyptian investment firm Qalaa Holdings, said on Sunday.

Heikal delivered an optimistic message on Egypt as an investment destination and a gateway into Africa at the opening of the first round of the Belt and Road Industrial and Commercial Conference (BRICA).

The event is organised by the Egyptian Businessman’s Association (EBA) and the China Federation of Industrial Economies (CFIE) under the patronage of Egyptian Minister of Trade and Industry Tarek Qabil. The two-day forum “Egypt, Your Gateway to BRICA,” features panel discussions on business and investment opportunities in Egypt and the BRICA countries including, a special focus the Suez Canal Zone, investing in Africa, industrial parks, banking and finance, as well as energy, transportation and logistics, and e-services.

“As an Egyptian investor I’m proud to be here today to deliver two important messages. The first is that Egypt is heading in the right direction in terms of investment climate and the second is that Egypt by virtue of its strategic geographical location is an important hub for investing in and exporting to Africa.” said Heikal.

“For the first time in a long time, Egypt is embarking on a very bold reform programme that includes the gradual removal of energy subsidies, the liberalisation of foreign exchange, and changes to the legal framework that represents the central core of investing. Additionally, there is also a new sense of fairness that exists within its bureaucracy, which is extremely important,”

“I think it’s safe to say that we are cautiously optimistic about Egypt’s future prospects,” explained Heikal. “With the recent government reforms, an improvement in our production of gas and petrol, decreasing imports by virtue of the new exchange rate, increasing exports, an improvement in tourism and a gradual return in FDI, Egypt’s economy is headed in the right direction. Qalaa has always been a believer in Egypt’s competitive advantages and thus we have invested in more than 30 African countries over the years.”

The landmark forum brings together Egyptian and Chinese government officials with leading figures from the Egyptian business community for two days of dialogue and networking that aims to boost economic cooperation and trade between Egypt, China and more than 65 member nations in the BRICA initiative.