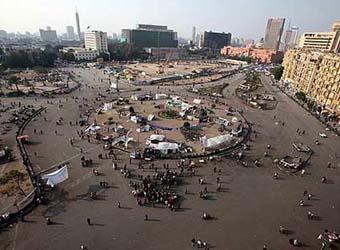 Three leading figures of Egypt’s 2011 uprising were jailed for three years each on Sunday for their role in recent protests, as the army-backed authorities intensified a crackdown on dissent.

Ahmed Maher, Ahmed Douma and Mohamed Adel are symbols of the protest movement that ignited the revolt that toppled President Hosni Mubarak in 2011. Their sentences include prison labour and fines of 50,000 Egyptian pounds ($7,200) each.

As the verdict was read, the three chanted “Down, down with military rule!” from the cage where defendants stand in Egyptian courts. The session, held at a police facility on the outskirts of Cairo, was attended by several European diplomats.

The verdict was the first under a law passed by the army-backed government in November that requires police permission for demonstrations. The case, in which the defendants were charged with protesting without permission and assaulting police, stemmed from protests called in defiance of the law.

Already pressing a fierce crackdown against the Muslim Brotherhood movement of deposed president Mohamed Morsi, the authorities have arrested a number of secular activists in recent weeks for breaches of the protest law.

Critics see it as an attempt to stifle the kind of street activism common since the 2011 uprising as the government proceeds with a new political transition plan. The next step is a mid-January referendum on a new constitution.

“COUP AGAINST THE REVOLUTION”

“What the current ruling authority is doing is … a coup against the January 25th revolution and all its goals,” Amr Aly, a leader of Maher’s April 6 youth group, told a news conference.

The powerful security apparatus that crushed most protests during Mubarak’s 30 years in power has reasserted itself since Morsi’s removal.

“We are starting to be seen as enemies of the state. It is not going to be the last time,” said Sally Toma, a leading activist, reacting to the verdicts. “They will try to kill everything that this revolution (against Mubarak) stood for.”

Morsi was removed by the army on July 3 after mass protests against his rule. The military has set a course for new elections next year that army chief Abdel Fattah al-Sisi is tipped to win, if he runs.

Morsi’s Muslim Brotherhood, Egypt’s best-organised party, has been driven underground in a crackdown that has killed hundreds of Islamists in the streets and jailed thousands more.

The courts have been on the front line of Egypt’s political struggle since Mubarak’s downfall. The veteran autocrat and his aides were put on trial for an array of charges which, for the most part, have not stuck. Following Morsi’s removal, Mubarak was released from prison, though he still faces retrial.

Reflecting how the balance of power has shifted, courts last week cleared the way for Mubarak’s last prime minister, Ahmed Shafik, to return to Egypt from self-imposed exile by shelving remaining corruption cases against him.

And the public prosecutor’s office ordered Morsi and other leading Islamists to stand trial in two separate cases, accused of terrorism and conspiring with foreigners against Egypt – charges that can carry the death penalty.

The youth activist movement spearheaded by the likes of Maher, Douma and Adel has faced legal action by the state throughout the last three years, both under army-backed rule and under Morsi.

Douma was jailed for six months for calling Morsi a criminal, and in the final weeks of the Islamist’s rule a group of 12 activists were sent to trial on charges of inciting violence near the Muslim Brotherhood’s headquarters.

They included Alaa Abdel Fattah, a prominent blogger who is also in detention awaiting trial for violating the protest law.

Ahmed Maher is a founder of the April 6 movement, one of the groups that used social media to organise against Mubarak. He was nominated for the Nobel Peace Prize in 2011.

The charges brought against the activists relate to a protest outside a court on November 30 when Maher went to turn himself in to the authorities in compliance with a previous arrest warrant for an alleged breach of the protest law.

On his arrival, accompanied by supporters, a protest and scuffles erupted outside the court building.

The activists could appeal against the ruling in a higher court.