Egypt is against nuclear proliferation in Middle East: ministry 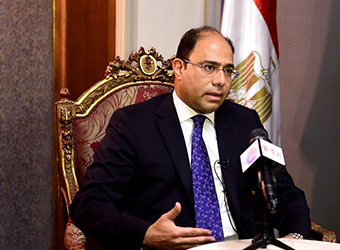 Egypt’s foreign ministry reiterated on Saturday Egypt’s position that the Middle East should be clear of nuclear weapons and other weapons of mass destruction, one day after United States President Donald Trump said he would not certify the 2015 Iran nuclear agreement to Congress.

A foreign ministry statement said that Egypt shares Trump’s concerns regarding Iranian policies that “lead to instability in the Middle East.”

Abu Zeid also said that Egypt calls for respecting “good neighbourly relations and not interfering in the internal affairs of Arab countries in order to boost the stability of the Middle East and to find sustainable solutions for the crises facing the region.”

President Trump has been threatening to scrap the Iran nuclear deal, which was signed in 2015 between Iran, France, Germany, the UK, China, Russia and the US under the Obama administration.

Trump accused Iran of “not living up to the spirit” of the agreement and said that his goal is to ensure Tehran never obtains a nuclear weapon.

“We will not continue down a path whose predictable conclusion is more violence, more terror and the very real threat of Iran’s nuclear breakout,” Trump said.

Trump’s remarks drew praise from Israel, but were criticised by European allies including Britain, France, Germany, Russia, China and the European Union, some of which have benefited economically from renewed trade with Iran, according to Reuters.

Iranian President Hassan Rouhani said on Friday on live television that Tehran was committed to the deal and accused Trump of making baseless accusations.