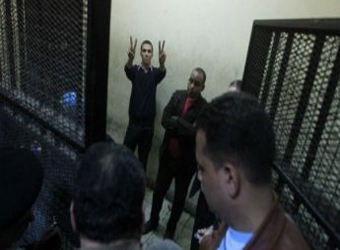 A court in Cairo has convicted 43 Egyptian and foreign employees of non-governmental (NGO) organizations for working illegally in Egypt.

The court sentenced the defendants – most of them in absentia – to jail terms of up to five years.

It also ordered the closure of offices and the seizure of assets in Egypt belonging to several US NGOs.

The case – which began in 2012 – has strained relations between Cairo and Washington.

US officials had threatened to cut off the roughly $1.5bn (£980m) in aid paid to Egypt every year.

On Tuesday, the Cairo court sentenced 27 defendants to five years in prison. Another five received two years and 11 were given one-year terms.

Only five defendants, including one American national, were present in court.

Most foreign defendants – nationals of the US, Germany, Serbia and Arab states – were able to leave the country last year after the authorities had lifted a travel ban against them.

They include Sam LaHood, son of the US Transportation Secretary Ray LaHood.

The court in the Egyptian capital also ordered the closure of a number of NGOs operating in Egypt, including the US-based International Republican Institute (IRI) and the National Democratic Institute (NDI).

Last year – when Egypt was under military rule – police raided the IRI and NDI offices as well as a number of Egyptian NGOs.

Washington has so far made no public comment on the latest ruling.