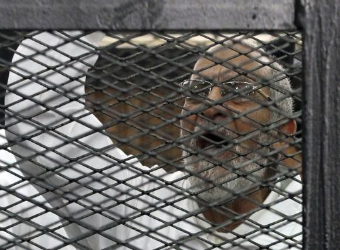 The top leader of Egypt’s Muslim Brotherhood accused Abdel Fattah al-Sisi, the former army chief widely tipped to become the country’s next president, of being a tyrant and predicted he would fail to stay in power.

Speaking on Tuesday from a cage in a courtroom where he faces trial for inciting violence, Brotherhood Supreme Guide Mohamed Badie also dismissed accusations by the military-backed government that the group engaged in terrorism.

“The people will not accept an army tyrant,” Badie said in reference to Sisi, who resigned from the military on Wednesday in order to contest a presidential election on May 26-27.

Sisi toppled President Mohamed Morsi, who was freely elected in 2012 after many years rising through the Brotherhood, last July after mass protests against his rule.

His ouster was followed by one of the toughest security crackdowns on the Brotherhood in its 86-year history. Hundreds of its supporters were killed at a pro-Morsi protest camp last August and thousands others including Morsi were arrested.

Badie and many other Brotherhood leaders have been put on trial in several cases, crippling a mainstream Islamist movement that won nearly every election since the uprising that toppled autocratic president and ex-army general Hosni Mubarak in 2011.

Badie, 70, and 50 others were on trial on Tuesday in connection with violence that occurred when security forces dispersed Morsi’s main Cairo protest camp last August.

Defendants were defiant throughout the proceedings, chanting the Egyptian national anthem, reciting versus from the Koran and making four-finger gestures that have come to symbolise Brotherhood resistance to state repression.

Defence lawyers withdrew from the session after a judge rejected one of their requests.

Sisi won over many Egyptians by removing the Brotherhood from power and pledging to crush “terrorist” attacks the government blames on the group, which lost support on the street after Morsi’s troubled year in office.

“The group has for over 85 years never engaged in terrorism and never surrendered to any terrorism even if it was practiced by the state, and has endured a lot for that sake,” said Badie, wearing a loose, white shirt-like garment.

“They (the current authorities) are the terrorists. This Sisi is the one who manufactured terrorism.”

The Brotherhood has accused the Egyptian state of practicing “terrorism” by rounding up thousands of people and engaging in what human rights group say are abuses.

“They (the authorities) are the ones who are killing the Egyptian people,” Badie said.

Only 33 of the 51 defendants appeared in court on Tuesday, while 18 others were being tried in absentia.

Scuffles erupted in the court after a judge told Brotherhood defendant Salah Sultan, a professor at the prestigious Al-Azhar University, to “shut up” after he complained of not being able to hear proceedings.

When a lawyer requested that a softer tone be used with Sultan because he was a religious scholar, the judge just smiled.

The defendants stood with their back facing the judge after the judge addressed Sultan and chanted, “Down, down with military rule.”

Proceedings were adjourned until April 6.

Last week, a judge in the city of Minya issued a stunning sentence, even by the standards of the wholesale repression of the Brotherhood, when 529 Brotherhood members and supporters were given the death penalty for murder and other offences.

Gehad el-Hadad, among the defendants who appeared in court on Tuesday, urged world powers to promote democracy in Egypt.

“Those leaders of the world who speak in the name of democracy, now is the time to stand (up) to end the military coup,” Hadad said in English.

“We are fighting for the freedom of our country. It is turning into a Sisi family. We will continue fighting for our freedom. We will not surrender.”