Egypt Pushes ‘Constitution for All’ – But Mostly Westerners 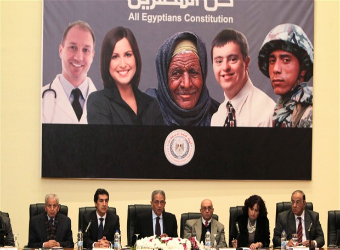 There were several things that looked wrong about the poster advertising a “Constitution for All Egyptians”.

There was the lack of any woman wearing a veil, for example, even though the vast majority of Egyptian women wear the hijab, or headscarf. Of the four men featured, none had either a beard or a moustache – the favoured facial hair respectively of Islamists and many supporters of the old military regime.

The most surprising thing, however, was that three of the five people represented did not appear to be Egyptian at all. And it did not take long for picture recognition technology to confirm that they were not.

The veil-less western woman in a suit turned out to be a stock picture licensed for free use by the Getty picture agency, most recently appearing on an Irish businesswomen’s networking site.

The doctor with the stethoscope round his neck had been used to illustrate an article on “How to remove stretch marks”. The man in the tie has featured in a number of American advertisements related to Down Syndrome.

In fact all five people could be found on the first pages reached by searching simple terms on Google Images: “doctor”, “businesswoman”, “Down Syndrome Man”, “Egyptian soldier” and “fellah”, an Arab word roughly translating as “peasant”. At least it was clear what the person choosing the pictures thought would be a good, positive cross-section of Egyptian society.

It has not been a good week for the military-led, much-trumpeted return to democratic rule in Egypt following the forcible removal from power of President Mohamed Morsi in the summer. Publication of the new draft constitution by a 50-strong committee led by Amr Moussa, the former foreign minister and Arab League secretary general, was supposed to be a new start, but it was unable to decide key issues such as whether to hold presidential or parliamentary elections first.

It was also heavily criticised by human rights groups for the free hand given to the military, including the right to put civilians on trial.

On Wednesday night, a recording of the defence minister, Gen Abdul Fattah Sisi, apparently suggesting that he might run for president because he had foreseen that he would rule Egypt in a dream also alarmed some Egyptians.

On Saturday, the interim president Adly Mansour announced the referendum on the constitution would be held on Jan 14-15. Mr Moussa himself, introducing the draft to journalists, yesterday predicted it would be supported by at least 70 or 75 per cent of the voters.

He refused to say what would happen if the government lost the referendum.

He also said he had no idea where the advertising posters came from.

“I think they were funded by businessmen,” he said.