Egypt Will Vote a Symbolic ‘Yes’ to Stability 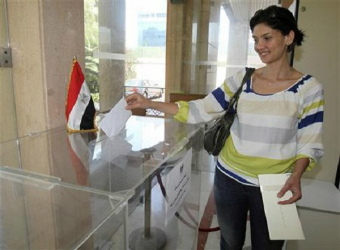 The 2014 constitution, hailed as a dramatic improvement on the 2012 version passed by the Brotherhood-led government, is not much different than the previous document in content. Both texts are hardly testaments to the hopes of the 25th of January revolution, and both contain a number of problems. There has not been a robust discussion about the pros and cons of the document in advance of the vote in the media – or rather, there have been many discussions about the pros of it.

There have not been particularly many discussions about the cons of it. Indeed, there have probably been more discussions about what has happened to people who argued against the constitution – members of the Strong Egypt Party, for example, were for doing so. When an organization like Human Rights Watch, who was deeply critical of former president Morsi and his government, issues a press release saying ‘Repression Intensifies Ahead of Constitutional Referendum,’ it is not particularly good news.

At best, one can argue that this is a free (in that there probably won’t be wide-scale fraud) and unfair referendum on a rather unimpressive text. If efforts to disrupt the vote turn violent, it is entirely possible the entire referendum could be postponed if turnout is affected.

Otherwise, however, it is almost definitely going to pass by a wide margin. Egyptians voting ‘no’ has never exceeded those voting ‘yes’ in a constitutional referendum. That is not because they endorse the actual document’s articles – that is, and always has been, a secondary consideration. The reasons for a ‘yes’ vote have generally been far more about the context of the vote itself – and what it implies.

With this vote, it implies something that is common with every constitutional vote – ‘stability’. The ‘stability’ argument worked tremendously well with Egyptian voters even a couple of weeks after the uprising that ousted Hosni Mubarak in 2011 – leading to a huge ‘yes’ vote for the referendum in March 2011.

Three years later, with the situation becoming far more unstable than it was in March 2011, the stability argument works again. Certainly, the main Salafi political party in the country, the Nour Party, is making that argument, yet again. It is even suggesting that a ‘no’ vote could lead to all out chaos.

There are other implications, though. This vote is being constructed – fairly successfully – as a referendum on the ouster of former president Mohammad Morsi in July last year. Hence why the Muslim Brotherhood and the rest of the Anti-Coup Alliance is boycotting the vote – to do otherwise would be to recognize the coup’s legitimacy, in their eyes.

There were a small number of people, parties and movements mobilizing for a ‘no’ vote – including the Strong Egypt party, the Way of the Revolutionary Path movement, and others. After the arrests of some of its members for giving out flyers against the constitution, the Strong Egypt party changed its decision, and opted for a boycott. Unsurprisingly, many others who would have voted ‘no’ on the basis of the actual document also boycotted for similar reasons.

There is a final consideration to keep in mind. Some ‘yes’ voters will consider their vote to be a sign that only are they satisfied with the road map – but they are happy to see it changed to have presidential elections before parliamentary ones. There is one candidate they will have in mind to run in those presidential elections, who came out forcefully on Sunday to encourage a ‘yes’ vote.

General Abdel Fattah el-Sisi was clear on that point – and the timing of his comments indicate he may consider a resounding ‘yes’ from voters to be an endorsement not only of the road map he instituted, but an approval of his candidacy for the presidency. Sometime in the next week or so, the general’s decision to run for the presidency will probably be clear – and the referendum’s result will play a role in that.

Many in Egypt will put to one side the massive violations of fundamental rights over the past 6 months in such an eventuality. Such abuses will be viewed as necessary, excusable, or even laudable, depending on who in the pro-military camp one might speak to. Nevertheless, that does not provide a President Sisi a blank cheque – or indeed, anyone else.

If General Sisi wants the job, he may find it is a poisoned chalice that even he will not be immune to. The Egyptian public came out against former President Mohammad Morsi because he did not deliver on the revolution’s promise to build a better future – if Sisi does the same, and it is hard to see how he might, his popularity may not last very long.

UAE Premier: Egypt’s Sisi Could Run As a Civilian