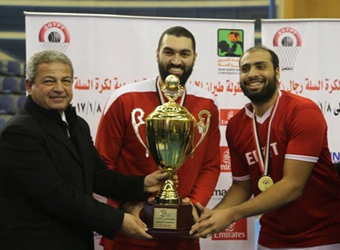 On Sunday, Egypt won the 22nd Emirates Airlines Basketball Championship for Arab teams, defeating Morocco by a narrow 96-90. This victory marks the second consecutive title win for the Egyptian team. Egypt’s Omar Tarek also won the award for best player in the championship.

The final match was held at the Cairo International Stadium.

Morocco had an early lead in the match, with a 32-21 lead over Egypt by the end of the first quarter. The team held their position through the second quarter, with a 51-42 lead. The Pharaohs managed to turn the tables on Morocco in the third quarter, ending it with a 73-70 advantage. In the final quarter, Egypt managed to maintain their narrow lead, ending the match with a 96-90 victory.

At the start of the second quarter, Egypt’s Mostafa Mekkawy was injured; however, he recovered in time to continue playing in the third and fourth quarters.

This is the second consecutive time Egypt has won this competition. In the previous edition, Egypt faced Algeria in the finals, thrashing their opponent by 78-54.

On Sunday, Bahrain defeated Saudi Arabia to secure the bronze medal with a 79-69 victory.