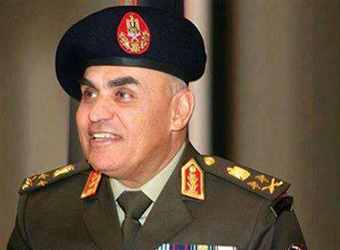 Egypt’s Defense Minister Sedki Sobhi spoke on Tuesday with several commanders from the military to discuss Egyptian efforts in contributing to the peace and stability of the Middle East and North Africa region.

During a video conference, Sobhi spoke to several army officers and soldiers and congratulated some commanders on assuming new duties.

In December, Egypt’s President Abdel-Fattah El-Sisi appointed in his capacity as the commander in chief of the armed forces new commanders for the Air Defense and Navy Forces.

Sobhi discussed the latest domestic and regional developments, focusing on efforts by the Egyptian army to persevere in assisting the unity of allied nations in coordination with international institutions.

The declaration asserted four main principles to be adhered to in Libya’s transition: the preservation of a united country, support for state institutions, non-interference by foreign bodies, and the maintenance of a civil state.

The defense minister also spoke about ongoing efforts being carried out by the armed forces in Sinai, praising the steps that have been undertaken through the military’s Martyr’s Right operation.

The operation was launched in September 2015 to eliminate terrorist groups while also to implement developmental plans for Sinai residents.

Since 2013, the army has been launching major anti-terror campaigns in several areas in central and North Sinai to eradicate terrorist elements who have killed hundreds of security forces in the governorate.