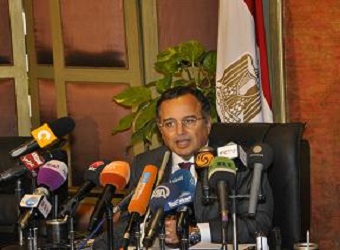 Egyptian authorities claim the controversial hydroelectric dam, currently under construction on the Blue Nile, will have negative implications for Egypt’s water supply.

Ethiopia has denied these allegations.

Fahmy stressed the importance that Egypt’s water supply and interests are not harmed to the EU representative.

The foreign affairs minister also highlighted the importance of serious negotiations to reach a solution that maintains the interests of all parties involved.

On Friday, Adhanom said his country is adamant about holding talks with Egypt, despite continuing to construct the dam and announcing that it will begin to generate electricity by 2015.

Egypt, Ethiopia, and Sudan had previously formed a tripartite technical committee to study the possible impact of the dam and to attempt to generate consensus on the project.

In recent meetings in Khartoum, the tripartite committee was scheduled to draft a document that entails “confidence building measures” between the countries, and also to form a special international conflict resolution committee.

However, the tripartite committee’s efforts were thwarted in December when Sudanese President Omar Al-Bashir announced his support for the Renaissance Dam during a meeting with Ethiopian Prime Minister Hailemariam Desalegn.