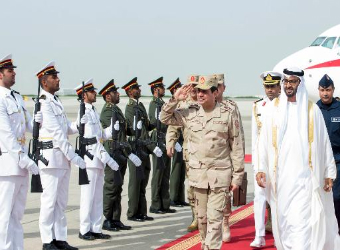 Field Marshal Sisi, who is Egypt’s defence minister and deputy premier, travelled to the UAE to attend the closure of joint military exercises there. He was met by UAE deputy army chief Sheikh Mohamed bin Zayed al-Nahyan.

The two men noted the “fraternal and solid relations linking the two countries and their peoples,” and their wish to “consolidate bilateral cooperation,” the WAM news agency reported, without giving details on Sisi’s plans or the length of his stay.

The Emirates have given Egypt $4.9 billion in financial aid since Morsi’s ouster, as well as deposited $2 billion in the Egyptian central bank, interest free.

As a sign of support for the military-installed government in Cairo, the UAE’s Arabtec contractor signed a memorandum of understanding Sunday to develop a $40 billion project to build one million housing units in Egypt.

The signing came ahead of an expected announcement by Sisi that he will run in elections to replace Morsi, a vote he is widely expected to win.

Sisi has emerged as the most popular political figure in Egypt following Morsi’s troubled year-long rule, with many viewing him as a strong leader who can restore stability after three years of unrest unleashed by the 2011 revolt that toppled Hosni Mubarak.