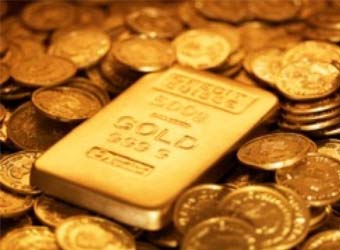 Gold prices were unchanged near a more than two-week low early on Wednesday, as the dollar held recent highs after Federal Reserve Chairman Jerome Powell vowed to prevent the economy from overheating while sticking with gradual rate rises.
Spot gold was flat at $1,317.81 an ounce at 0116 GMT. Prices fell 1.1 percent and had touched an over two-week session low of $1,313.26 in the previous session.

The dollar index, which measures the greenback against a basket of major currencies, was steady at 90.354.

The dollar held near an over two-week high hit in the last session, while Asian shares faltered and bonds were sold off, after Powell’s upbeat views on the economy bolstered bets on further Fed interest rate hikes this year.

The Fed is expected to approve its first rate increase of 2018 at its next policy meeting in March, when it will also provide fresh economic projections and Powell will hold his first news conference.

The European Central Bank could end bond purchases this year while an interest rate hike in 2019 is not unrealistic if the euro zone’s economic upswing continues, Bundesbank President
Jens Weidmann said on Tuesday.

Gold prices could break above $1,400 an ounce for the first time since 2013 this year as an uncertain outlook for stocks, bonds and currencies tempts investors to use the precious metal as a safe haven, according to a Reuters survey of analysts.

Ghana will certify the value of gold exports as part of efforts to tighten controls on the sector to ensure the state receives the revenues it is due, the vice president said on Tuesday.

A company owned by Nirav Modi, the billionaire jeweler at the heart of a $2 billion fraud case in India, has filed for bankruptcy in a New York court, as investigators stepped up their investigation into a case that has stunned the country.

US oil prices fall for second day after stockpiles rise