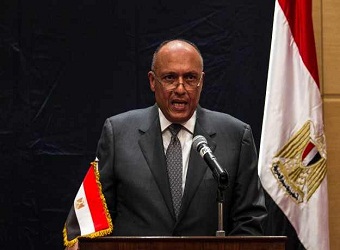 Share
In exclusive statements to Ahram Arabic website on Wednesday, Egyptian Foreign Minister Sameh Shoukry announced that his government had invited the ministers of foreign affairs and irrigation, as well as the heads of the intelligence agencies of Ethiopia and Sudan, for another round talks about Grand Ethiopian Renaissance Dam.

Those talks will be held in Cairo starting April 20, Shoukry said from Riyadh, where he is currently attending preparatory meetings for the 29th Arab summit.

The foreign minister explained that this invitation for another round demonstrates just how keen Egypt is to reach a common understanding between the three parties.

“We will continue to comply with the instructions of political leaders in our countries to break this deadlock, during the upcoming one-month period lasting from 5 April to 5 May,” he told Ahram Arabic website.

In early April, FM Shoukry stated that the roundtable talks in Khartoum about the impact of GERD on downstream countries were fruitless.

“The talks were transparent and discussed a lot of issues but they did not yield anything,” he said.

The foreign minister added that Egypt was suggesting innovative solutions in accordance with international law.

“We think about what the others may think and want in the most objective way, not only about what we think or want, and we believe that the other parties should do the same. This is what Egypt is looking for,” he said.

The Ethiopian government began constructing the Grand Renaissance Dam on the Blue Nile near the border with Sudan in 2011 as part of a development plan aimed at eradicating poverty and generating electricity.

In the past seven years, Egypt, Ethiopia and Sudan have held several rounds of talks on the dam’s anticipated impact on Nile water resources.

Egypt has expressed concern the dam could adversely affect its share of Nile water.