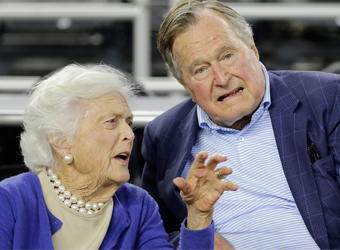 Former US President George HW Bush and his wife Barbara Bush have been admitted to a hospital in Houston, Texas, according to a spokesman.

The 41st president was admitted on Saturday due to “an acute respiratory problem stemming from pneumonia”.

The 92-year-old has now been moved to the intensive care unit after doctors performed a “procedure to protect and clear his airway”.

Mrs Bush, 91, was admitted on Wednesday suffering from fatigue and a cough.

During his procedure, Mr Bush was sedated, his spokesman Jim McGrath said in a statement.

Mr Bush, the oldest living US president, is expected to be well enough to go home in a few days.

In a letter addressed 10 January, Mr Bush wrote to President-elect Donald Trump to say that “my doctor says if I sit outside in January, it will likely put me six feet under”.

“Same for Barbara. So I guess we’re stuck in Texas,” he wrote, adding that they will be “with you and the country in spirit”.

Mr Bush, who served as US president from 1989-93, spent a week in hospital in the US state of Maine in 2015 after falling and breaking a neck bone.

He also suffers from a form of Parkinson’s disease and uses a wheelchair.

The elder Bush was born 12 June 1924, in Massachusetts and also served as a congressman, CIA director and vice president to Ronald Reagan.