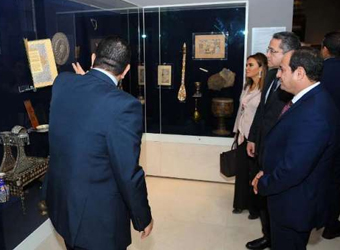 The museum, which boasts about 100,000 relics including a sword said to have belonged to the Prophet Muhammad (PBUH), holds one of the largest Islamic civilisation collections in the world.

The museum in central Cairo had been partially destroyed after a massive car bomb went off outside nearby police headquarters in January 2014, in an attack claimed by Egyptian jihadists.

The blast damaged 179 relics including glass lanterns from the era of the Mamluks, the slave warrior caste that directly ruled Egypt from the 13th to the 16th centuries.

Antiquities Minister Khaled El Enany said 160 relics have been restored, at the reopening ceremony attended by Sisi and aired on television.

Three new exhibit rooms have been built, with the museum now showing 4,400 relics, from more than 1,450 before the bombing, he said.

Several countries have funded the restoration.

In a separate unrelated development, Egypt has added Mohamed Aboutrika − one of the most successful African footballers of his generation − to its terror watch list on suspicions he financed the banned Muslim Brotherhood, his lawyer said on Tuesday.

The Brotherhood was outlawed in 2013.

A court official said on Tuesday that Aboutrika was one of more than 1,500 people, including former president Mohamed Mursi and other Muslim Brotherhood members behind bars, who were added to the watch list last week.

In 2015 a government committee froze the assets of the former player for Cairo-based club Al Ahly and Egypt’s national team, two years after he retired.

According to an anti-terror law imposed in 2015 by Sisi, anyone on the country’s terror list is subject to a travel ban, with their passport and assets liable to be frozen.

Aboutrika helped deliver repeated victories for Egypt in the African Cup and played on winning Al Ahly teams in the African Champions League. He publicly endorsed Mursi’s presidential bid in 2012.

Aboutrika’s lawyer Mohamed Osman said “we will appeal this decision,” adding that “if he is added to the list there will be many legal consequences, notably the travel ban.”

Obama fears moment ‘may be passing’ for two-state solution