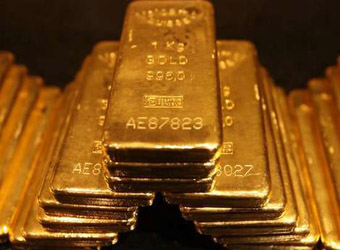 Gold traders are bearish for the first time this year after the Federal Reserve signaled it may refrain from more monetary stimulus and jewelers in India, the world’s biggest bullion market, shut to protest a new tax.

Fifteen of 29 analysts expect prices to decline next week and five were neutral, the highest proportion since Dec. 30. Imports by India may have plunged as much as 81 percent in March and could drop 40 percent in the second quarter, the Bombay Bullion Association said April 2. Indian jewelers, who sell more gold than Australian and U.S. mines produce in a year, were closed yesterday for a 19th day.

Slumping Indian demand comes as prices already erased more than half of this year’s gains on mounting concern the Fed won’t buy more debt. Gold rose about 70 percent as the central bank bought $2.3 trillion of debt in two rounds of quantitative easing ending in June 2011. Policy makers indicated they won’t increase monetary accommodation unless the economy falters, according to minutes of their March 13 meeting released April 3.

“Reduced prospects for quantitative easing, if you read that as a strengthening U.S. economy, then it’s bad for gold,” said Carole Ferguson, an analyst at Fairfax IS in London. “Gold has lost some of its safe-haven shine this year. The Indian jewelry market is still very important. If strikes are a longer- term thing it’s more of a worry.”

A Labor Department report tomorrow may show employment rose by more than 200,000 workers for a fourth consecutive month, according to a Bloomberg survey of economists. U.S. growth will accelerate to 2.2 percent this quarter and 2.5 percent in the following three months, compared with 2 percent in the first quarter, according to the median of 73 economist estimates compiled by Bloomberg.

While the Fed is sticking to a plan to hold the benchmark interest rate near zero at least through late 2014, federal fund futures on the Chicago Board of Trade show an 11 percent chance it will raise borrowing costs by the end of this year. The odds for an increase were 4.5 percent two months ago. Gold generally earns holders returns only through price gains. The metal will trade at $1,550 within a month, Edel Tully, an analyst at UBS AG in London, said in a report yesterday.

Indian consumers bought 567.4 metric tons of gold jewelry last year, according to the London-based World Gold Council. Australia and the U.S. are the world’s biggest gold producers behind China, producing a combined 515 tons, according to CRU, a research company in London. Indian jewelers closed stores to protest a 1 percent excise duty on non-branded gold ornaments. The nation remained the biggest gold market on an annual basis last year even as China overtook it in the fourth quarter.

“Markets seem to be assuming all is OK now, but any re- emergence of problems — Iran, Europe, and U.S. economic front — would see gold higher again,” said Adrian Day, the president of Adrian Day Asset Management in Annapolis, Maryland.

Investors bought 62,500 ounces of American Eagle gold coins from the U.S. Mint last month, almost three times the amount sold in February, data on its website show. The 210,500 ounces purchased in the first quarter is still at least 22 percent less than in the first three months of the previous two years.

Spot gold’s 100-day moving average dropped below the 200- day measure for the first time in three years last week, reinforcing a bearish trend, UBS said in a report yesterday. Its 14-day relative-strength index is at 37.7, with a level of 30 indicating to some analysts that a rebound may be due.