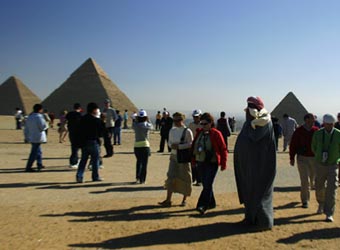 The number of international tourists to Egypt declined during the last quarter of 2011 by 29.2 percent, at 2.9 million compared to 4.2 million at the same time in 2010, according to state news agency MENA.

In a statement about tourism from October to December issued on Sunday, the Central Agency for Public Mobilization and Statistics said the tourism sector is still affected by the state of insecurity in Egypt.

Despite this, Western Europe was the highest tourist-sending area during the last three months of 2011, sending 33.8 percent of all tourists. Tourists coming from Middle East were estimated to make up 14.1 percent of the total, and those from Africa 4 percent.

The agency also reported a decline in the number of nights spent by tourists during the 2011’s fourth quarter by 12.4 percent, compared to the same period in 2010.

Western Europeans ranked the first with 45.4 percent of nights spent in Egypt, Middle Easterners with 22.1 percent, Eastern Europeans with 21.8 percent, and Africans with 4.2 percent.