Financial Institutions
By Yomna Yasser On May 22, 2013 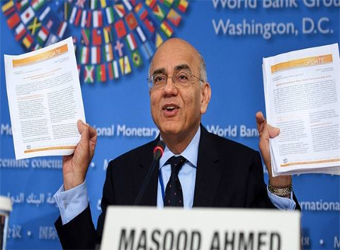 Egypt’s worsening fiscal gap is a concern but the International Monetary Fund is still ready to continue talks on a $4.8 billion loan once Cairo completes a review of its economic program, a senior IMF official said.

“We are ready to engage with them on reviewing and finalizing the program as soon as they completed it,” Masood Ahmed, IMF Director for the Middle East and North Africa, told Reuters in an interview on Tuesday.

Negotiations with the IMF have stumbled repeatedly over the Islamist-led government’s resistance to the austerity measures needed to get Egypt’s soaring fiscal deficit under control.

The IMF expects Egypt’s budget deficit to widen to 11.3 percent of gross domestic product in the fiscal year, which ends in June, the largest gap since 2002, from 10.7 percent in the previous year, it said in a regional outlook published earlier on Tuesday.

“It is a source of concern because it adds pressure on the financing requirements for the Egyptian economy domestically,” Ahmed said after presenting the regional outlook in Dubai.

“It’s an additional source of crowding out financing for the private investment. Of course, that’s one of the reasons the authorities are reviewing their numbers,” he said.

The IMF sees Egypt’s budget gap narrowing again to 8.7 percent in the fiscal 2013/14, its report showed.

An IMF deal would help shore up investor and donor concerns after two years of political instability since the overthrow of president Hosni Mubarak, showing that Egypt is committed to reforms such as cutting fuel subsidies and raising sales taxes.

It is hard to say when the Egyptian authorities are going to finalize the program review, Ahmed said, adding the IMF could conclude negotiations relatively quickly.

“I think the work (on the program review) is advanced but it is up to them to take steps that will bring it to conclusion,” he said.

Ahmed told the presentation that the reason why the IMF was emphasizing the broad political support for the government reform program was to increase odds that it will go through: “The driver of this is the need to have a higher probability … that the measures that are proposed will be implemented.”

The IMF has also been in talks to provide a fresh loan to impoverished Yemen, of around $500 million, but Ahmed said the government there first needed to agree on its economic program, which he described as being at a quite advanced stage.

“As soon as they are able to do so then our team is ready to finalize the discussions. I am hoping this can be done soon because the situation facing Yemen is the difficult one,” he said, adding the amount of aid would depend on the program.

Last year wealthy Gulf Arab states, Western governments and other donors pledged $7.9 billion in aid over several years to Yemen, but only a small fraction has so far arrived.

“It’s important for donors to deliver on those pledges and also provide some financing in the form of support for the budget because it is the budget that will need the financial support rather than financing projects outside the budget,” Ahmed said.