Le Pen loss to be a win for European equities 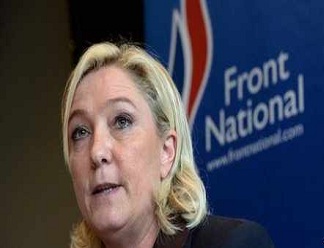 If far right French presidential candidate Marine Le Pen loses the election, it will spur a significant surge of inflows into European stocks, JPMorgan said in a note Monday.

JPMorgan estimated that a Le Pen loss will see at least ten percent of assets under management flow back into the region’s stock markets.

It noted that since the beginning of 2016, around $100 billion has flowed out of the segment, according to EPFR data, marking up a loss of nearly ten percent of assets under management.

“We believe that these flows at least could come back into the region, should political uncertainty fade, in addition to any potential new net inflows,” JPMorgan said.

Some opinion polls have shown that Le Pen, leader of the far right, anti-European Union, anti-immigrant National Front party, could be a top pick in the first round of voting in France’s presidential election on April 23.

A healthy majority of analysts and experts believe Le Pen, who wants to pull France out of the euro zone, won’t win the second round of voting on May 7 if she makes it past the first.

But fears abound over a potential dark horse Le Pen victory, in line with political surprises such as Brexit and Donald Trump’s U.S. presidential win.

That’s spurred concerns of a potential French exit from the euro zone, dubbed Frexit, and even a possible breakup of the bloc.

While JPMorgan noted that any “Le Pen loss” lap of inflows was likely to boost the euro, it didn’t expect that would weigh on European stocks, which have benefited from a weaker currency.

“We think a stronger euro would not be an impediment for regional equities and, in fact, believe the euro will turn positively correlated to euro zone equities, no matter the election outcome,” it said.

It noted that the euro is typically seen as a vote of confidence in the region.

JPMorgan viewed a victory by either of the other two front-runners, Francois Fillon and Emmanuel Macron, as likely to spur a market rally.

“Both are in favor of lower taxes, reduced public spending, and improved EU integration and are supportive of free trade,’ it said. “France ranks poorly on many fiscal and growth metrics and could benefit from ambitious structural reforms.”

But the bank noted that while it considered a Le Pen victory unlikely, it wasn’t out of the realm of possibility.

JPMorgan considered a Le Pen win and euro zone breakup fears would have a similar impact on markets as the 2011-12 European debt crisis, when around 20-25 percent of assets under management flowed out of European equities.

If Le Pen wins, JPMorgan estimated that Eurozone equities could potentially fall nearly 20 percent, with the potential for a 10 percent earnings projection downgrade from its base case.

It also estimated the euro would fall to $0.98, compared with current levels of around $1.0860 The bank’s base case is for the euro to rise to $1.15 by year-end following a Macron or Fillon victory.