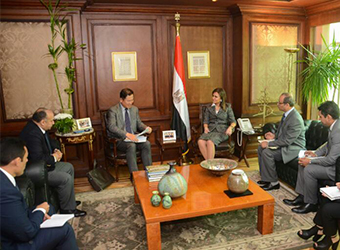 Kwack made these remarks during his meeting with Egyptian Minister of Investment and International Cooperation Sahar Nasr and Alaa Omar, Vice-President of LG Electronics.

Due to LG’s ongoing success over 22 years, the company’s main headquarters in South Korea decided to set up a new project in the 10th of Ramadan City, Kwack revealed, saying the company obtained a piece of land covering 207,000 square metres, according to a statement released by the Ministry of Investment and International Cooperation.

From his part, Omar said LG is working on the production of televisions and, due to its success in the field, it expanded the scope of its work to produce all types of televisions with a production capacity of 300,000 devices a year.

He pointed out that LG’s products were not dedicated to the local market only, but they were exported to several Arab countries as well such as Libya, Syria and Tunisia, in addition to the African market under the slogan “Made in Egypt”. He noted that the washing machine production line would be launched by the end of May with a production capacity of 100,000 machines to be gradually increased during the upcoming years.

He further said that LG is currently working on the assembly of refrigerators and air conditioners and soon such devices would be fully produced in Egypt.