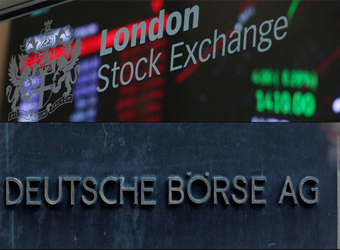 The €29 billion ($30.65 billion) tie-up between the London Stock Exchange (LSE) and Deutsche Börse has been thrown into doubt as the U.K. exchange said it would not be able to meet a last-minute antitrust request from the European Commission.

Describing the request to sell its 60 percent stake in MTS, an Italy-based fixed income electronic trading platform, as “disproportionate”, the LSE said it would not present the disposal plan by midday Monday as requested by the European regulator on February 16.

“Following dialogue with Italian authorities about the Commission’s required remedy and given prior discussions between the principals and Italian authorities regarding LSEG’s Italian businesses in the context of the Merger, the LSEG Board believes that it is highly unlikely that a sale of MTS could be satisfactorily achieved, even if LSEG were to give the commitment,” according to a statement released by the U.K. exchange on Sunday evening.

“Moreover, the LSEG Board believes the offer of such a remedy would jeopardise LSEG’s critically important relationships with these regulators and be detrimental to LSEG’s ongoing businesses in Italy and the Combined Group, were the Merger to complete,” the announcement continued.

The LSE statement also conceded that the European Commission would be unlikely to provide clearance for the tie-up given its current position.

Neither exchange was available for comment when contacted by CNBC on Monday.

The European Commission’s request – which was described as unexpected by the U.K. exchange – followed the submission of concessions seeking to address anti-trust concerns by the would-be merger partners this month.

The submission outlined plans to sell the LSE’s French clearing arm to Euronext for 510 million euros in order to counter authorities’ concerns over the concentration of derivatives clearing activities at a post-merger combined company.

Running alongside competition concerns, however, are growing apprehensions among politicians in both the U.K. and Germany that either of Europe’s two largest financial hubs might cede ground to the other once a merger completes.

Fears over the continued dominance of the City of London in a post-Brexit world have added extra impetus to this imperative for British politicians. Furthermore, lawmakers in other European countries including France, Belgium, Portugal and the Netherlands have expressed their reservations about the deal taking place with regards to competitive implications for their own domestic exchanges.