Mexico will pay US back for wall 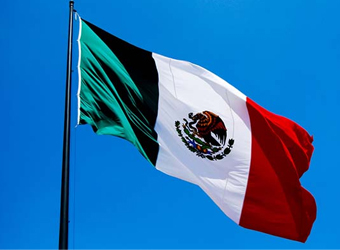 The US Congress is exploring ways to pay for a southern border wall, with payment to be sought from Mexico later.

President-elect Donald Trump made building a wall, paid for by the US neighbour, a central campaign pledge.

The businessman sparked a storm of disapproval in 2015 when he said Mexico was sending criminals and rapists north to the US through a porous border.

In a tweet on Friday, he lashed out at the “dishonest media” for saying taxpayers would foot the bill.

“Any money spent on building the Great Wall (for sake of speed), will be paid back by Mexico later!”

“I think he’s going to continue to talk to them (the Mexican government) about that,” he told ABC News.

Congressional Republicans confirmed they have the legal authorisation to build the wall under the Secure Fence Act passed by former president George W Bush in 2006.

But to ensure they have the funding, they may seek to add billions of dollars to the government’s spending bill – which needs to pass by 28 April to keep the federal government open.

Democrats may oppose that spending, risking a government shutdown.

At Donald Trump’s campaign rallies, his supporters loved when their man asked who was going to pay for his border wall. “Mexico!” they shouted in unison.

It made for powerful political theatre – a shared moment between candidate and voter. But polls indicated that few Americans, even Trump backers, actually believed Mexico would foot the bill.

Now it appears their lack of confidence was well-founded. Getting any kind of a border wall built – let alone the “big, beautiful” structure Mr Trump envisions – will be a political grind. If it requires a diplomatic battle with Mexico before the first brick is laid, the chances of success would dwindle.

The practical course was always to build first, then deal with Mexico.

Political writer Salena Zito once observed that Trump’s supporters take their man seriously but not literally, while his media critics do the opposite. Trump voters may not mind if Mexico doesn’t pay, as long as the president-elect takes border security seriously.

Mexico’s president and senior officials have said that they will not pay for the wall, despite Mr Trump’s campaign pledge.

But Republican Congressman Chris Collins said he has no doubt the Mexican government will end up paying.

“When you understand that Mexico’s economy is dependent upon US consumers, Donald Trump has all the cards he needs to play,” Mr Collins said on CNN.

“On the trade negotiation side, I don’t think it’s that difficult for Donald Trump to convince Mexico that it’s in their best interest to reimburse us for building the wall.”

China’s ZTE to slash about 3,000 jobs-Reuters