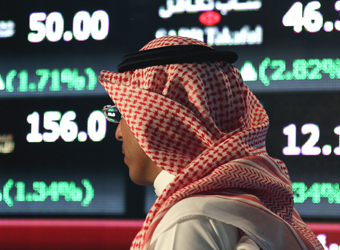 Stock markets in the Middle East were mixed Monday with Saudi Arabia rising on the back of a rebound in oil prices and a continued slide by amusement park operator DXB Entertainments helping to drag down Dubai.

But PetroRabigh, which had tumbled its 10 percent daily limit on Sunday after reporting a sharp widening of its quarterly loss, sank a further 5.4 percent.

Real estate developer Dar Al Arkan was the most heavily traded stock and added 3.9 percent after saying its board had accepted the resignation of Abdulrehman Hamad al-Harkan as chief executive, effective on June 1, for personal reasons. It did not name a new CEO.

Dubai’s index slipped 1.1 percent on a late wave of selling as DXB Entertainments sank 5.6 percent to its lowest level since April 2015.

Investors have been disappointed by attendance figures at the company’s parks and last week it reported a wider first-quarter loss, warning that attendance was likely to fall in the next two quarters.

The underlying stock jumped nearly 7 percent in early trade but closed 0.1 percent lower at 0.762 dirham as the rights, which began trading on Monday and will continue through May 28, swung widely between 0.03 dirham and 0.215 dirham.

Since the rights allow the underlying stock to be bought at a price of 1.0 dirham, well above the stock’s current market price, they may never be exercised. But the price of the rights is so low that some local investors see a good chance for short-term speculation with minimal downside.

Shuaa Capital dropped 6.6 percent despite reporting that it had swung to a first-quarter profit from a year-earlier loss; total revenues shrank during the quarter.

Abu Dhabi’s index dropped 0.6 percent but Qatar rose 0.6 percent on the back of several blue chips such as Doha Bank, up 1.3 percent, and Barwa Real Estate , which gained 1.4 percent.

Kuwait was the best-performing market in the region, rising 0.7 percent. International equity index compiler MSCI was due to announce late on Monday changes in its indexes that will occur when Pakistan is reclassified to emerging market status from a frontier market on June 1.

Pakistan has a roughly 10 percent weighting in MSCI’s frontier index and once it goes, the index will be more than a fifth weighted to Kuwait, analysts have estimated. That could mean significant flows of funds into Kuwait; about $6.4 billion is currently under management with frontier equity funds.

Egypt’s index edged down 0.04 percent although Egyptian Iron & Steel jumped 7.1 percent after reporting a slight reduction in its net loss for the first nine months of its fiscal year.