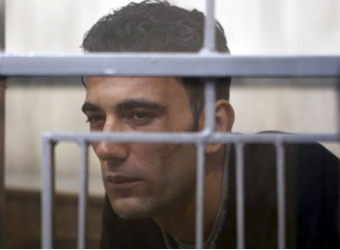 A Tunisian man has been found guilty by a court in Sicily of causing the sinking of a boat in which 700 migrants died in April 2015.

Mohammed Ali Malek, who had denied being the boat’s captain, was given 18 years in jail. He was also convicted of manslaughter and human trafficking. A Syrian was handed a five-year sentence.

The heavily overcrowded boat sank off Libya after colliding with a merchant vessel that had come to its rescue.

Only 28 people survived the disaster.

Many of those who died had been crammed into the hold of the fishing boat and locked inside.

Most of the victims on the 27m-long (90ft) boat were from countries including Mali, Gambia, Senegal and Ethiopia. Among the survivors were two young Bangladeshis who took part in the case as civil plaintiffs.

Malek had denied being captain of the boat when it rammed the side of King Jacob merchant vessel as it came to the trawler’s aid in international waters. Prosecutors at the court in Catania said his control of the boat had been “naive, careless and negligent”.

He drew the BBC a diagram, arguing that the fishing boat had lost balance because of waves created by the King Jacob’s propeller.

Mahmoud Bikhit, a Syrian accused of being a crew member, was also convicted by the court on Tuesday and given five years in jail.

Flanked by six police officers and a translator, the defendant, Mohammed Ali Malek, stood behind bars in an enclosure.

The judge entered the room and remained standing while she read out a short summary of her verdict and sentence.

Malek did not react as the ruling was delivered. He appeared to offer some sharp words when one of the prosecutors walked past his enclosure afterwards.

In a regular criminal trial, family members of the victims usually come to court to watch justice being delivered.

But this case was different. The victims came from poor families from sub-Saharan African countries who were unable to travel to Europe for the trial.

There was not a single family member present to represent the 700 dead.

The scale of the disaster prompted the EU to rethink its response to the migrant crisis unfolding in the Mediterranean.

However, the numbers of people crossing to Italy in unsafe boats from North African countries has risen this year to 175,244, the UN says. The number of fatalities in the Mediterranean has also risen to 4,742, an increase of almost 1,000 on 2015.

A ship carrying 854 migrants rescued off the Libyan coast was due to arrive on the Italian island of Sardinia on Tuesday. The vast majority were men from sub-Saharan and North Africa.