Entertainment
By Administrator On Mar 3, 2012 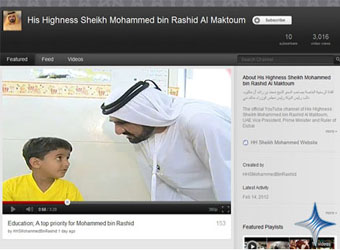 The YouTube channel of His Highness Shaikh Mohammad bin Rashid Al Maktoum, Vice-President and Prime Minister of the UAE and Ruler of Dubai, has drawn 2,121 users and 201,633 viewers up to Thursday after it was launched two weeks ago.

The social network platform is attracting increasing interest locally and internationally day after day.The channel underlines Shaikh Mohammad’s “growing interest in adapting modern technologies to consolidate direct interaction with society”, and he is also one of the most keen world leaders in making use of modern technologies for direct interaction between leaders and their people.

The channel features Shaikh Mohammed’s official and personal news, activities and initiatives, as well as other exclusive videos.

Thousands of audience log to view video footage of Shaikh Mohammad’s daily visits and tours as well as other political, economic, social and sports activities.

The channel underlines His Highness’ keenness to enhance bridges of communication between a leader and his people and the audience who follow his news and various initiatives across the worldww.

The initiative, a first-of-its-kind for a head of government in the Arab world, emphasises Shaikh Mohammed’s belief that direct communication is an important requirement for leaders and decision makers.

The Channel will broadcast updated video clips of His Highness’ news and main events, providing the audience with an interactive environment of communication. Visitors to His Highness’ YouTube Channel will be able to send videos they have filmed of him at various events or locations to be uploaded on the channel.