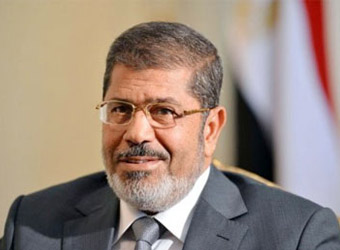 Prosecutors Sunday accused deposed president Mohammed Morsi of leaking state secrets to Iran’s Revolutionary Guards as part of a plot to destabilize Egypt, at the second hearing of his trial for espionage.

The trial, one of three that are under way against Morsi, is part of a relentless government crackdown targeting him and his Muslim Brotherhood movement since his ouster by the army in July.

Prosecutors accuse Morsi and 35 others, including leaders of the Muslim Brotherhood, of conspiring with foreign powers, Palestinian militant movement Hamas and Shiite Iran to destabilize Egypt.

On Sunday, the second hearing since the trial opened on February 16, they detailed the charges against Morsi and his co-defendants.

They were specifically accused of “delivering to a foreign country… national defense secrets and providing the Iranian Revolutionary Guards with security reports in order to destabilize the security and stability of the country”.

The statement read in court did not identify the “foreign country.”

But prosecutors said Morsi and the defendants carried out espionage activities on behalf of the “international Muslim Brotherhood organization and Hamas with an aim to perpetrate terror attacks in the country in order to spread chaos and topple the state” from 2005 to August 2013.

During Morsi’s one year presidency, ties flourished between Cairo and Hamas, a Palestinian affiliate of the Muslim Brotherhood which rules neighboring Gaza.

But since July, Egypt’s military-installed government has accused Hamas of backing Morsi and his Brotherhood, and carrying out terrorist attacks inside the country.

At Sunday’s hearing Morsi was held separately in a soundproof glass cage, designed to keep him and the other defendants from interrupting the proceedings with outbursts.

But this did not stop defendants including Brotherhood supreme guide Mohamed Badie, his deputy Khairat al-Shater and other Islamist leaders from shouting and rejecting the accusations against them.

“Void, void,” they shouted when the judge asked them if they accepted the charges, an AFP correspondent said.

If found guilty, the defendants could face the death penalty.

Most of the defendants were also accused of moving armed groups in and out of Egypt in January 2011, in a bid to attack army and police installations and prisons to facilitate the escape of inmates.

Also on Sunday the defendants were represented by a new team of 10 defense lawyers appointed by the lawyers’ union, to replace the original team that withdrew from the case.

The trial was adjourned to February 27.

Morsi is already on trial for the killing of protesters during his presidency and a jailbreak during the 2011 uprising that ousted his predecessor Hosni Mubarak.

Egypt’s first democratically-elected president, also faces trial for “insulting the judiciary.” A date for that has yet to be set.