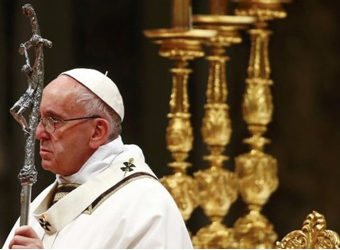 Pope Francis has warned against a rise in populism and the dangers of allowing political crises to usher in dictators like Hitler.

He made the comments as Donald Trump was being sworn-in as US president in a wide-ranging interview with Spanish newspaper El Pais.

The Pope condemned the use of walls and barbed-wire to keep foreigners out.

But he said it was too early to judge the new US leader, saying “we’ll see what Trump does”.

Mr Trump has caused controversy with his comments on Mexican immigrants and his plans for a wall to keep them out.

Asked if he was worried about the rise of populism in Europe and the US, the Pope said: “Crises provoke fear, alarm. In my opinion, the most obvious example of European populism is Germany in 1933.

“Germany is broken, it needs to get up, to find its identity, a leader, someone capable of restoring its character, and there is a young man named Adolf Hitler who says: “I can, I can”.

“And all Germans vote for Hitler. Hitler didn’t steal the power, his people voted for him, and then he destroyed his people.”

On Mr Trump, the Pope said he would “wait and see”.

“I don’t like to get ahead of myself nor judge people prematurely. We will see how he acts, what he does, and then I will have an opinion,” he added.

The pair publically disagreed during the presidential campaign, with Pope Francis appearing to question Mr Trump’s Christian faith over his plans to build a border wall with Mexico.