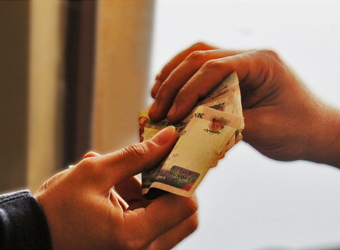 The Egyptian authorities arrested the finance minister’s adviser for receiving one million Egyptian pounds (over 53,000 U.S. dollars) from a contractor as part of a larger bribe for mispricing a state-owned land, the Egyptian state TV reported.

According to the Administrative Control Authority (ACA), the country’s official anti-corruption body, the corrupt official was scheduled to get a total bribe of four million pounds (more than 212,000 dollars) to misprice the land of a tourist village that would cause the state a loss of about half a billion pounds (26,595 dollars).

The case is part of a massive anti-corruption campaign launched by Egypt over the past few years that led to the arrest and imprisonment of several officials and senior employees and the retrieval of large amounts of money.

In April 2016, Egyptian former Minister of Agriculture Salah Helal and his deputy were sentenced to 10 years in prison over receiving bribes to grant state-owned land licenses to prominent Egyptian businessman. Helal was fined one million pounds (53,191 dollars) while his deputy was fined half a million (26,595 dollars).

Similarly, Egyptian former Supplies Minister Khaled Hanafy resigned in August amid sharp criticism over using millions of dollars allocated for subsidies to purchase wheat that existed only on papers in the most populous Arab states and the world’s largest wheat importer.

A parliamentarian, also a presenter of a TV show, also accused Hanafy of wasting seven million pounds (372,340 dollars) in staying at a luxurious hotel in Cairo since he took office in 2014, yet the minister denied the charges.

In two separate cases in November, the Egypt authorities arrested and sacked two senior judges, one over possession of 68 kilograms of hashish drug and another over accepting a large bribe to acquit a defendant in a drug smuggling case.

A week earlier, the ACA said that it busted a national agricultural company’s chief over bribery related to favored import orders and a tax official over bribery to reduce a company’s four million pounds (212,765 dollars) taxes.

Also in December, an Egyptian court confirmed a three-year jail term against former Housing Minister Mohamed Ibrahim Suleiman and ordered him to refund over 255 million pounds (13 million dollars) to the state over selling vast areas of state-owned lands in new cities to a real estate mogul below market prices.

However, a committee formed by order of President Abdel-Fattah al-Sisi refuted Genina’s charges as “misleading and exaggerated.” Genina was sacked in March 2016 by a presidential decree.

Out of 168 countries and regions, Egypt ranked the 88th least corrupt in the Corruption Perceptions Index 2015 reported by Berlin-based Transparency International, which shows improvement of Egypt’s anti-corruption campaign as the country ranked 95th in 2014 and 114th in 2013.