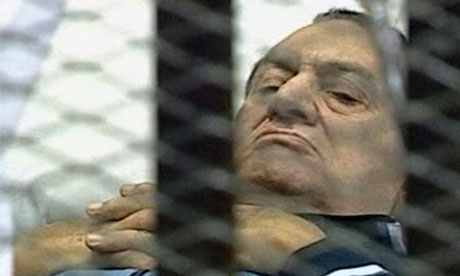 Prosecutors in the trial of Egypt’s Hosni Mubarak offered their closing remarks on Monday, demanding the former president be held responsible for the deaths of protesters during the clashes that led to his ouster last year, state media reported.

The ailing Mubarak is on trial on charges of corruption and ordering the deaths of hundred of protesters. He has denied the charges.

“Even if the defense statement was true that the former president was not aware of such acts, he remains responsible by virtue of the Constitution and the law — for all of these acts were committed while he was acting as a president,” said prosecutor Mustafa Suleiman, according to EgyNews, Egypt’s official news agency.

The last days of Hosni Mubarak’s regime Egypt one year after uprising A look at Mubarak’s fall, Syria’s future

“As president, Mubarak was responsible for protecting all Egyptian citizens. He didn’t take the appropriate measures to carry out his duty to stop the bloodshed and the acts of violence against the Egyptian people,” Suleiman continued.

The defense is expected to address the court on Wednesday, at which point a verdict date will be scheduled, EgyNews reported.

Prosecutors have said they will seek the death penalty for Mubarak, who was forced from office in February 2011 after three decades of iron-clad rule.

About 840 people died and more than 6,000 were wounded in the 18 days of unrest that toppled the then-president, according to Amnesty International.

Egypt’s revolution came on the heels of Tunisia’s revolt that led to the ouster of that country’s leader in January 2011. Since then, protests against longtime rulers swept across North Africa and the Middle East, including uprisings in Libya, Yemen and Syria.

US and Mexico agree Gulf of Mexico oil cooperatio