US and Mexico agree Gulf of Mexico oil cooperatio

International News
By Administrator On Feb 21, 2012 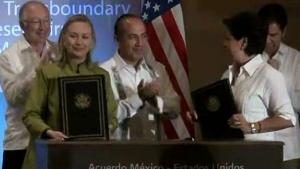 The US and Mexico have agreed to work together to develop deep-water oil and gas fields that straddle their maritime border in the Gulf of Mexico.

The deal was signed at a meeting of the G20 group of industrial and developing countries in Los Cabos, Mexico.

US Secretary of State Hillary Clinton said it would ensure responsible energy exploration in the Gulf.

Mexican President Felipe Calderon said it would ease Mexican fears that their oil might be appropriated by the US.

The deal, negotiated last year, was signed by Mrs Clinton and the Mexican Foreign Minister Patricia Espinosa, with President Calderon acting as a witness.

It ends a moratorium on oil development near the maritime boundary in the western Gulf and sets up a legal framework for companies to develop cross-border fields jointly.

“These reservoirs could hold considerable reserves that could benefit the US and Mexico alike, but they don’t necessarily stop at our maritime boundary. This could lead to disputes,” Mrs Clinton said.

“The agreement we are signing today will help prevent such disputes,” she added.

Mrs Clinton also stressed that it would allow US companies to work in partnership with the Mexican state oil company Pemex for the first time.

President Calderon said the deal would boost Mexico’s energy security and increase revenues from Pemex, which account for about a third of government income.

“This agreement was negotiated under the invariable principle of respecting the sovereign rights of each country to its natural resources,” he said.

“Mexico’s oil wealth belongs and will continue to belong to the Mexicans,” he stressed.

Both countries affirmed that the deal would also ensure greater environmental protection – a key concern after the huge Deepwater Horizon oil spill in the Gulf in 2010.

Mexico is a major oil and gas producer but is well behind the US in developing deep water fields in the Gulf.