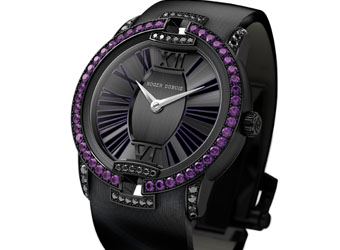 ROGER DUBUIS has been at the forefront of the contemporary Fine Watchmaking scene since 1995. Its audacious creations, firmly anchored in the 21st century, bear the mark of all the savoir-faire and expertise of the finest watchmaking mechanisms. Rich in conceptual creativity and mechanical detail, its collections are inspired by four different worlds: Player, Warrior, and two newcomers: Venturer and Diva. They will give the inspiration to embark upon this New Year of 2012.

More than just a traditional watch manufacture, ROGER DUBUIS is the reflection of a space spilling over with creative ideas. The Genevan watchmaker has taken its inspiration from four different and distinctive worlds from which it has created a universe in which exuberance takes pride of place and creativity reigns supreme. These four worlds feed the imagination of their designers and contribute to the construction of the brand’s image: Player, Warrior, and those who will be at the forefront of the stage in 2012, Venturer and Diva.

Diva is impregnated with elegance and beauty, just like the Velvet Collection that has been inspired by it.

With the clear desire to look to the future to create the watches of tomorrow today, ROGER DUBUIS challenges the senses day after day. Each of its four fantasy worlds occupies a clearly defined territory and helps to inspire the collections Excalibur, La Monégasque, Pulsion and Velvet, that will write new chapters in the history of watchmaking. The brand infuses them with the conventions that it holds dear: a case that clearly defines identity; reliability and expertise; boldness and total authenticity. With the touch of mystery and the unexpected that is a characteristic feature.

For ever walking on a tightrope, always off the beaten path, the boundaries of normality have no meaning in his life. The world of the Venturer is marked by danger and challenge. Adrenalin is his fuel, action is his engine, intelligence and alertness are his protection. This is the world that permeates the new Pulsion Collection from the Genevan watchmaker ROGER DUBUIS. These are timepieces made in his own image: naturally powerful, and effortlessly controlled.

For the Venturer is of the breed who defy the rules, despite the pitfalls, which he overcomes without a single false move, his resolute gaze shows that he is not around just to make up the numbers. He is a man who is determined to set the pace, someone who likes to push back the boundaries. The Venturer is marked by strength of character, a constant desire to surpass himself and the ability to handle every situation. He flirts with danger, but accurately assesses the risks to avoid the pitfalls.

He is the total master of his own destiny. If he seems to be constantly on the edge of the precipice, he knows how to hold the road and easily handles the trickiest of bends. He never loses his head. His world is both attractive and disconcerting at the same time. We sense that he is no stranger to exciting and daring experiences. More than just a lifestyle, he represents the art of good living. The world of the Venturer is a constant succession of the most powerful, intense and astonishing exploits.

The models in the new Pulsion Collection from the Genevan watchmaker ROGER DUBUIS are inspired by the world of the Venturer and embody a certain image of raw virility. They are defined by both clear lines and a certain impenetrability, combined with strength and presence. Their mechanical movements, characterised by discipline and rigour, are the embodiment of veritable watchmaking challenges. As soon as the observer sets eyes upon them, they impose their very special way of occupying space and their powerful identity: pure charm in its natural state. Their force and their boldness give them a sense of difference, of triumph and of mystery: the very essence of imaginative force.

In this way Pulsion watches form an integral part of the extraordinary universe of ROGER DUBUIS. A world that marks out a new approach and reforges the identity of Fine Watchmaking. What the Genevan watchmaker is introducing is nothing less than a new mode of aesthetic expression, reinforced by unique standards of mechanical reliability and precision.

Faithful to the tradition of excellence that gives the House its reputation, the watches in the Pulsion Collection comply with all the latest requirements of the “Poinçon de Genève”. This mark of quality, issued by the Canton of Geneva to a small number of watchmakers, represents an official guarantee that the watch and its functions all operate correctly. It also certifies that the watch movement is made by hand, assembled and regulated in Geneva and that it complies with the strict requirements laid down for the watch manufacture. Roger Dubuis is the only watch Manufacture to produce 100% of its movements in accordance with the criteria of the “Poinçon de Genève”.

Syrian Regime is being supported by Iran

Balbaa’: 60% local production is a dream to achieve