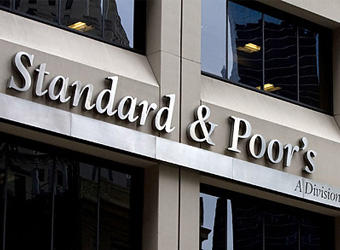 Standard & Poor’s cut its rating on four Egyptian banks on Tuesday, saying they held a large amount of government debt and faced significant risk as the government’s likelihood of meeting fiscal targets deteriorates.

“We think Egypt is currently vulnerable and dependent upon favorable political and economic developments to service its debt obligations,” S&P said in an emailed statement.

It also said it lowered its unsolicited public information rating on National Societe Generale Bank (NSGB) to ‘CCCpi’ from ‘Bpi’.

Egypt has been in crisis since a popular uprising ousted Hosni Mubarak in early 2011, and has run through more than $20 billion in reserves, borrowed billions more from abroad and delayed payments to oil companies to support its currency.

“In our view, NBE, BM, CIB, and NSGB face significant sovereign risk because they hold a high amount of government debt compared with their equity base and earnings capacity,” the statement said.

Egypt is seeking a $4.8 billion loan from the International Monetary Fund to support its economy.