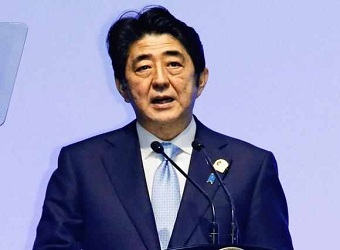 Japanese Prime Minister Shinzo Abe reiterated his apology Sunday for a cronyism scandal as opposition lawmakers warned it would hamper his ambitions of changing the country’s pacifist constitution.

Public anger over the revelation that Finance Ministry officials doctored documents relating to the discounted sale of public land to a school operator with connections to Abe’s wife sent his poll numbers plummeting a week ago. Speaking at his ruling Liberal Democratic Party’s annual convention, Abe vowed to ensure such actions would not be allowed to happen again.

“Ultimate responsibility for the administration lies with me,” he said, pledging to carry out his “responsibility to rebuild the system.” Despite the setback, he told lawmakers the time was right to tackle a proposed change to the constitution and “put an end to the argument” that Japan’s Self-Defense Forces are unconstitutional.

While Abe has said he wants cross-party agreement on constitutional revision, which requires a two-thirds majority in both houses of parliament before it can go to a national referendum, his plans met with criticism from potential allies Sunday.

“The Moritomo problem must be calmed down before we can change the constitution,” Toranosuke Katayama, joint leader of the opposition Japan Innovation Party, told national broadcaster NHK. Speaking on the same program, Toshio Ogawa, of the separate opposition Democratic Party, said talk of changing the charter looked like “an attempt to change the subject” from the scandal.

Until a few weeks ago, Abe looked certain to sail through the September LDP leadership vote, which would give him a shot at becoming the country’s longest-serving prime minister.

A Kyodo poll conducted March 17-18 found former Defense Minister Shigeru Ishiba was the most popular candidate to become party leader in September, with 25.4 percent of respondents picking him. Second was Shinjiro Koizumi, son of a popular former prime minister, with Abe in third place.

Ishiba’s criticism of Abe after the convention was muted — he told reporters progress was too slow on changing the constitution, but emphasized the need for party unity when asked whether he planned to run against the premier in September.

“While the public are looking at the government and ruling party with harsh eyes, we must avoid doing things that cause confusion within the party,” Ishiba said. He hinted that he would consider his candidacy once public anger subsided.

Finance Minister Taro Aso, who is Abe’s deputy, also is under pressure to resign as he heads the ministry at the heart of the scandal.

Nobuhisa Sagawa, who stepped down as the nation’s tax chief earlier this month amid questions over his involvement in the deal, is set to testify in parliament on Tuesday. Any blame he places on Abe or Aso for the controversy could worsen their current predicament.

Europeans to take new steps against Russia over UK spy