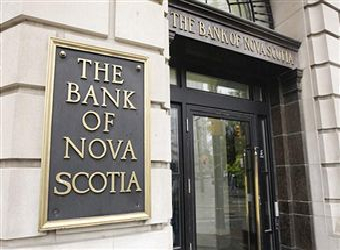 Officials from the Central Bank of Egypt (CBE) and Canada’s 3rd largest lender Scotiabank recently held a meeting over the latter’s exit plans.

Established in 1976, Scotiabank has its resident office in Egypt. However, the Canadian bank is currently studying to end its banking services in Egypt within the upcoming period, to be added to other 3 banks exited from the North African market following the outbreak of 2011 uprising.

As pursuant to Article 42 of the CBE, Banking Sector and Money Law No. 88/2003, no bank shall cease its transactions, except upon prior approval from the Board of Directors of the Central Bank. This approval shall be issued after verification that the bank has submitted adequate guarantees, or has finally cleared all obligations toward depositors, other debtors and the staff rights, according to the conditions and procedures to be issued by a decision of the Central Bank.

Scotiabank is one of North America’s premier financial institutions and Canada’s most international bank. With approximately 48,000 employees, Scotiabank Group and its affiliates serve about 10 million customers in some 50 countries around the world. Scotiabank offers a diverse range of products and services including personal, commercial, corporate and investment banking. Scotiabank operates as a full service branch in Egypt. It is specialized in corporate/ commercial loans, treasury and trade finance.