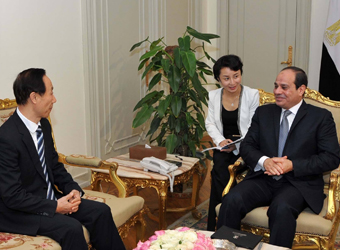 President Abdel Fattah Al-Sisi met with Chinese politician and senior diplomat Wang Jiarui, in presence of the Minister of Legal and Parliamentary Affairs Magdy El-Agaty and China’s ambassador to Cairo to discuss bilateral relations, according to the presidency spokesperson on Thursday.

Jiarui, vice chairperson of the National Committee of the Chinese People’s Political Consultative Conference, stressed that Egypt represents one of the most important partners for China in the Middle East and Africa, and praised Egypt’s efforts in maintaining stability and political progress over the past two years.

He also praised Egyptian-Chinese relations, saying they witnessed remarkable growth over the past years and are advancing towards a great level of strategic partnership. He added that the reciprocal presidential visits reflected the presence of a strong will from both sides to promote bilateral cooperation on all levels.

The meeting aimed at strengthening communication and consultation between both countries’ political parties and their respective parliamentary institutions, which will contributes to strengthening the bonds of friendship and understanding on the official and popular levels. Both sides were updated on Egypt and China’s current cooperation in different fields.

The official’s discussions included a number of topics related to the development of a comprehensive strategic partnership between the two countries on various levels. It also included discussions on a number of regional issues, including wars in some countries in the region. Al-Sisi reviewed Egypt’s stance and strategy regarding the Syrian crisis and the situation in Libya, as well as counter-terrorism efforts.

The Chinese official praised the role Egypt played to restore stability in the region and to contain the repercussions of these crises.