Sisi: nobody is above the law in battle to reclaim land stolen from Egypt 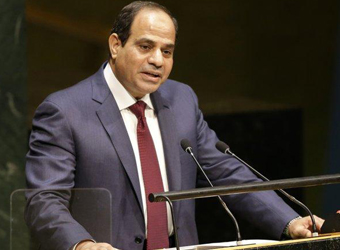 Egypt’s President Abdel Fattah al-Sisi has renewed his call for the retrieval of state land illegally acquired by private investors, telling a gathering of officials in Damietta that no one is aboave the law– no matter what their authority or who they are.

The president’s comments are his first since a televised speech last week in which he expressed his frustration at the slow pace of efforts to retrieve state-owned land. Shortly afterward, Prime Minister Sherif Ismail gave governors a deadline of 30 May to complete all retrieval operations.

El-Sisi made his new comments at a meeting in Damietta governorate on Tuesday for the opening of various development and infrastructure projects.

“No one is above the law. Whoever places his hands illegally on the nation’s land is a thief and a land-grabber, no matter who he is, because he unlawfully acquires the money of the poor while taking advantage of his authority. I swear I will not ignore anybody’s rights,” the president said.

Among those present at the event was Housing Minister Mostafa Madbouly, who gave a presentation on efforts to end informal settlements.

Sisi called on governors and officials to deal seriously and decisively with those who are illegally in possession of state land.

He announced that a meeting would take place at the end of May to review achievements in reclaiming land, attended by governors and security directors.

Since last week, in line with Sisi’s instructions, the interior ministry and the army have repossessed thousands of feddans of land.

During his TV address last week, El-Sisi urged the interior ministry and the armed forces to put an end to transgressions. Prime Minister Sherif Ismail set the 30 May deadline shortly afterward.

Since February 2016, Egypt has been trying to recover state land, with Sisi establishing a committee headed by former Prime Minister Ibrahim Mahlab, with thousands of feddans retrived and put into auction in the past months.

At the event on Tuesday, Sisi also urged Health Minister Ahmed Emad El-Din to bring Egypt’s figures for hepatitis-C virus in line with global rates in the next year, promising the minister the backing of the military in achieving the goal.

The health minister gave a speech on the achievements of his ministry during the past 18 months, at the top of which were efforts to bring hepatitis-C virus infection in line with global rates within the next two years.

The minister said that 1.550 million hepatitis-C patients had been cured by March 2017, adding that the ministry has increased the number of medical centres treating the illness to 163.

According to the ministry, 8,000 cases are discovered each month, making 96,000 per year. This represents an infection rate of almost one percent of the population.

However, the minister gave a higher percentage of 3.5 percent, bearing in mind those cases that have not been identified.

In July 2015, the number of Egyptians between the ages of 15 and 59 diagnosed with hepatitis-C stood at 7 percent, according to the World Health Organisation.

In Damietta, Sisi also urged the government to accomplish all those developmental projects that are behind schedule by the end of 2017.

He made the call in response to a presentation by Administrative Control Authority (ACA) chairman Mohamed Erfan, who showed the number of developmental projects that have been finished, the ongoing projects, and those to be opened by Sisi on Tuesday.

He opened Damietta Military Hospital during the event, with a presentation showing state-of-the-art equipment installed.