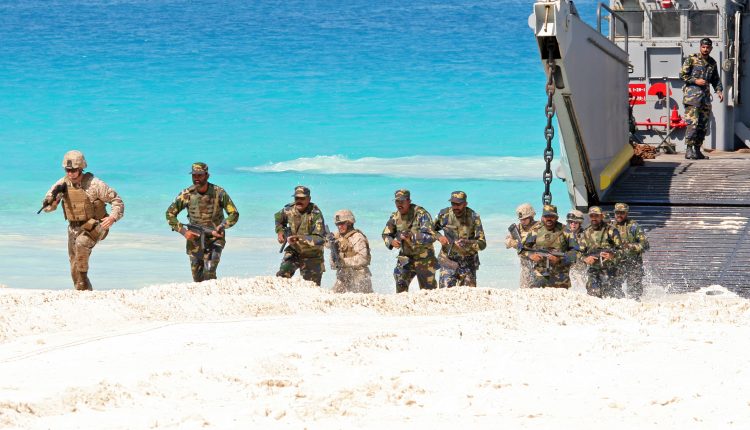 US troops and military equipment that will take part in the Bright Star 2018 military manoeuvres have arrived in Egypt according to an Egyptian Armed Forces communiqué released last week.

The exercises are scheduled to take place from 8 to 20 September at the Mohamed Naguib Base, west of Alexandria, and in designated areas of the Mediterranean.

Land, naval and air forces from Egypt, the US, Greece, Jordan, the UK, Saudi Arabia, the UAE, Italy and France will take part in the drills.

Lebanon, Rwanda, Iraq, Pakistan, India, Kenya, Tanzania, Uganda, the Democratic Republic of Congo, Chad, Djibouti, Mali, South Africa, Niger, Senegal and Canada have been invited to attend as observers. That India and Pakistan will attend together is in itself remarkable.

Such a large array of participants makes this year’s manoeuvres the largest in the history of the Bright Star operations which began in the early 1980s.

According to the Armed Forces’ communiqué the Bright Star 2018 manoeuvres will promote the exchange of expertise and interoperability among participant forces, hone their skills, develop operational and training methods in counter-terrorism and non-conventional warfare, furnish training in administrative support processes, medical evacuation, anti-mining operations and the latest methods of countering threats to maritime security, and develop expertise in planning and implementing joint aerial operations.

“We are looking at manoeuvres that began big and strong and which have continued to grow in terms of the numbers of participants, the types of training exercise and the kinds of arms and training programmes used,” says General Hisham Al-Halabi, a military advisor at the Nasser Military Academy.

That so many countries with military and political weight in their own continents want to take part in the drills is testimony to Egypt’s own political and military strength.

“Egypt has equipped the Mohamed Naguib Base with state-of-the-art facilities. It has outstanding capacities for coordinating between and hosting a large number of participants from different branches of other countries’ military forces,” says Al-Halabi.

The exercises change each year as new weapons enter service in participant countries and new training methodologies and programmes emerge.

This year will see the development of counter-terrorism programmes, crucial for an operational theatre such as the Middle East which has seen a massive expansion of the kinds of military technologies used in counter-terrorism efforts.

The design of exercises also takes into account the diversity of weaponry among participants and any differences in combat creeds.

“There are logistic matters that need to be dealt with, the different cultures and languages of the participants, transportation and accommodation. That Egypt can do this seamlessly is an indication of the country’s strengths and its excellent planning skills, credit for which goes to the Egyptian Armed Forces,” says Al-Halabi.

The manoeuvres also reaffirm the closeness of Egyptian-US military relations and their strategic partnership.

“The numbers involved in the current manoeuvres are significant. They are the biggest manoeuvres ever in the Middle East. They are the largest of their kind, at present, in the world, which gives an indication of Egypt’s political and military strength, and of the growth in the level of cooperation between Egypt and the US. They also underscore the importance of these exercises and the attention they have drawn. Last year there were 18 participants. This year there are six more. This underlines the growing conformity of the political and security policies of friendly nations when it comes to addressing the threats and dangers in our own region and elsewhere in the world.”

Bright Star 2018 is the 14th in the series of training operations which began in 1981. The series has twice been interrupted, first in 1991, when participant nations were engaged in the liberation of Kuwait, and later as a result of the Arab Spring uprisings consequent conflicts in Libya, Syria, Yemen and Iraq.

General Al-Halabi describes the latest Bright Star manoeuvres as “a powerful return after a hiatus due to the regional circumstances”.

The training programme combines lectures with practical exercises. The latter will include preparing and organising battlefield and command and control activities as part of a joint command project.

There will also be training focused on contending with weapons of mass destruction, intelligence exchange and live ammunition targeting, urban warfare and the elimination of terrorist bases. A senior leaders’ seminar will be held at the end to discuss the best practices.

“All sides gain from these manoeuvres,” said General Qashquoush.

“Egypt benefits greatly. There is the confidence and esteem it receives from all these major powers.”

Particularly remarkable in this year’s Bright Star is the level of African participation.

“Egypt has returned in force to the African sphere at all levels… Today, Egypt is working to enhance these important cooperative relations,” says Al-Halabi.