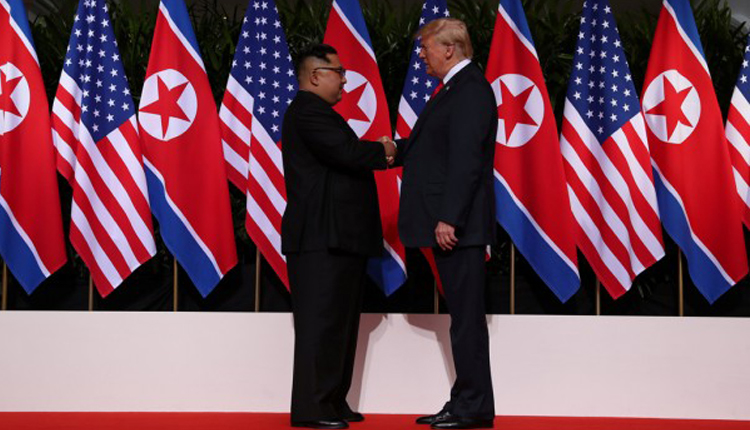 For both men, the summit, the first between leaders of North Korea and the United States, is likely to be a defining moment of their careers.

The meeting would have been unthinkable last year when tensions spiraled in the region over North Korea’s nuclear and missile programs as it raced toward the goal of developing a nuclear-tipped missile capable of hitting the United States.

Trump vowed to prevent that happening and threatened North Korea with “fire and fury like the world has never seen”. He mocked Kim as “little rocket man” on a suicide mission.

Kim denounced the U.S. president as the “mentally deranged U.S. dotard” who would be “tamed … with fire”.

Trump can look back to President Richard Nixon’s 1972 trip to China, when the ardent anti-communist defied conventional wisdom to meet Chairman Mao Zedong, irrevocably shifting the Cold War balance and setting China on a path to opening up.

Trump and his senior officials have in recent weeks been referring to Kim as “Chairman”.

For Trump, cutting a deal to end the North Korean nuclear threat with his approach to Kim, in defiance of the U.S. security establishment’s long-held ways of dealing with the North, would be a success unmatched by any predecessors.

It would justify his supporters’ faith in his art of deal-making and allow him to repudiate the naysayers with a foreign-policy success he will be able to hail. Some supporters have said he could win the Nobel Peace Prize.

For Kim, about half Trump’s age and representing the third generation of North Korea’s ruling dynasty, the summit affords both him and his long-isolated country the international legitimacy his father and grandfather could only dream of.

North Korea has faced years of economic sanctions over its nuclear and missile programs since it conducted its first nuclear test in 2006.

Trump and Kim could agree on a declaration to end the 1950-53 Korean War, the fire in which his grandfather, Kim Il Sung, forged the North Korean state. The war was concluded with a truce, not a peace treaty, but a treaty will also have to include China, which was party to the armistice.

The young Kim is reviled as an international pariah over the 2017 murder in Malaysia of his half-brother, and the execution of hundreds of officials, including his uncle, for suspected disloyalty.

But he will win legitimacy with the handshake.

A successful summit could also herald momentous changes in the security landscape of northeast Asia, in a similar way to how the fall of the Berlin Wall in 1989 changed Europe.

For China, peace on the Korean peninsula would benefit regional development, especially that of its northeastern rustbelt.

While China has broadly supported the summit, it will want to protect its interests. North Korea has always been a useful buffer between China and U.S. forces in South Korea.

Japan will also be watching with ambivalence – happy to see the sabre-rattling ending but worried its security might be sacrificed in Trump’s rush to neutralizes the North Korean threat to the United States.

Trump said on May 24 he was scrapping it after threats by North Korea to pull out over what it saw as confrontational remarks by U.S. officials demanding unilateral disarmament.

North Korea had earlier criticized U.S. national security adviser John Bolton, who had called for North Korea to quickly give up its nuclear arsenal in a deal that would mirror Libya’s abandonment of its program for weapons of mass destruction.

Libyan leader Muammar Gaddafi was deposed and killed by NATO-backed militants in 2011 after halting his nascent nuclear program and North Korea has long rejected any suggestion of a Libya model.