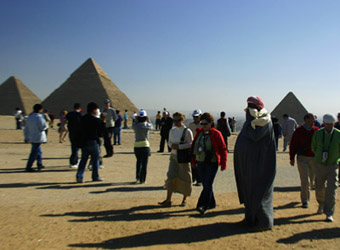 TUI Germany, part of Europe’s largest tour operator TUI Travel, is restarting holidays to Egypt with immediate effect after the German foreign ministry relaxed its travel advice for the country.

With the Red Sea resorts remaining calm, some tour operators, including Thomas Cook Germany, have announced plans to restart trips in time for the winter season, even before the ministry changed its advice.

The German government updated its advice on Wednesday, no longer saying tourists should stay away entirely from Egypt, but that they should exercise particular caution, including when travelling to Red Sea resorts.

Many European travel firms had halted trips to the country after violence broke out in July and August and governments advised holiday makers to stay away.

Accounting for around 11 percent of gross domestic product (GDP) in Egypt, tourism is vital to the country’s economy. It is a popular destination during the European winter, especially with British, Russian and German holidaymakers in search of sunshine.

Tourism receipts in Egypt tumbled to $1.67 billion in the second quarter, a decline of $663 million from a year earlier, according to central bank figures released on Tuesday.

“Our Egyptian partners are pleased that German holiday makers can return to Egypt, especially now that the important winter season is beginning,” TUI Germany boss Christian Clemens said in a statement.

TUI said it was also checking to see whether it could once again offer trips to Cairo and Luxor as well as river cruises.

The German foreign ministry said it still advised against travelling to places in Nile Delta outside of Cairo and Alexandria and that holiday makers were advised to remain in the Red Sea resorts and not take trips to Luxor and Aswan.

Is The Ban on The Muslim Brotherhood The Revolution’s End?

Egypt to Open Rafah Border Next Saturday, for 3 Days