Egypt to Open Rafah Border Next Saturday, for 3 Days 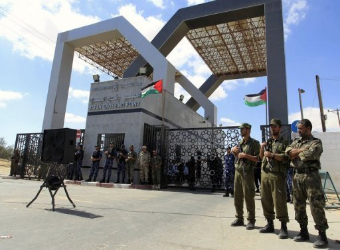 Palestinian Ambassador in Cairo, Barakat Al-Farra, said on Wednesday the Rafah crossing between Egypt and Gaza will be opened for three days starting Saturday.

Al-Farra, who has been recently engaged in negotiations with Egyptian authorities over the crossing, stressed that “only students, and those with essential and humanitarian needs” will be allowed to pass.

The Rafah crossing is the only way in and out of Gaza that is not controlled by Israel.

On 15 August, Egypt closed the Rafah crossing with the Gaza Strip “indefinitely,” citing security fears due to unrest following the removal of president Mohamed Morsi. Since then, Egyptian authorities have been opening the crossing occasionally for “emergencies.”

Tensions have been on the rise between the Egyptian government and Hamas – an offshoot of the Muslim Brotherhood – since former Islamist president Mohamed Morsi, who hails from the Brotherhood, was ousted by the army on 3 July amid mass protests against his one-year rule.

Egyptian army spokesperson Ahmed Ali stated last week that the military had confiscated munitions in northern Sinai bearing the stamp of the Ezzeddin Al-Qassam Brigades, Hamas’ military arm. He also said there was “cooperation between armed, terrorist organisations [in Sinai] and their counterparts in the Gaza Strip.”

Hamas has denied these claims, describing them as “lies and fabrications.”