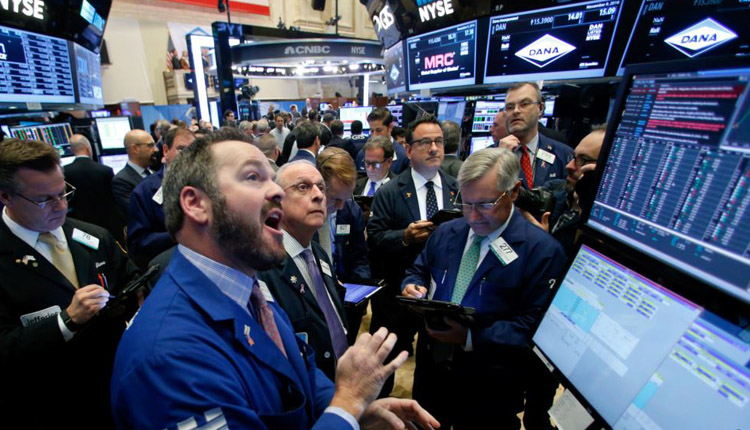 Dow Jones futures rose slightly early Wednesday, along with S&P 500 futures and Nasdaq futures, ahead of the Fed meeting announcement this afternoon.

The stock market rally continues to trade tightly, searching for direction despite a positive report Tuesday on the China trade war front.

But as the Dow Jones and other major indexes consolidate near highs, Apple stock, AMD stock, Google stock, Microsoft stock, and Target stock look like leaders.

During the strong stock market rally from early October to late November, it was easy for stocks to advance steadily as well.

But with the market rally awaiting clarity on China trade, Fed policy and more, some recent winners have begun to face a little pressure. A few have faded below buy points, or seen handles continue to drift lower.

AMD stock and Apple stock are on IBD Leaderboard.

Remember that overnight action in Dow futures doesn’t necessarily translate into actual trading in the next regular stock market session.

The current stock market rally started off with modest morning gains on a report that President Donald Trump planned to delay December 15 China tariffs, including the Apple iPhone for the first time.

But the impact was relatively muted, with the White House not confirming the China trade news. It appears that the stock market rally has largely priced in a tariff delay, so there may not be much upside.

The stock market rally also isn’t expecting any Fed rate moves or other policy changes at Wednesday’s meeting. Rates are likely on hold for the next several months, though the China trade war is an X factor. The Fed likely will continue its not-QE asset purchases and other liquidity moves.

The Dow Jones today is offering a chance for leading stocks to consolidate and offer new buying opportunities, including bases, handles, tight patterns and bullish rebounds from key support. Investors should focus on great stocks — the best of the best of the best.

Apple stock is well-extended from a breakout, though it has been trading tightly. Google stock is just past a 5 percent chase zone. Microsoft stock and AMD stock are in three-weeks-tight patterns, according to Marketsmith weekly charts.

Both are potentially working on flat bases. Target stock has held on to its gains after surging 14 percent on November 20 on yet another quarter of accelerating growth.

Another reason to watch these companies is because they are industry titans and huge market weights. Apple stock and Microsoft stock have market caps above $1.1 trillion.

Google stock is trying to join the trillion-dollar club. AMD stock and Target stock have market caps of less than $100 billion, but AMD and Target are leading their respective sectors right now.

Keep in mind that these stocks look strong today but that could change. It’s one thing to hold up when the stock market rally is moving sideways, but a true pullback or correction would drag down even the leaders. Bad news on the China trade war front would be especially bad news for Apple stock, AMD stock and Target stock.